Looking back on a successful first year

Since the founding of the NOVA Pilots Team sub-team in July 2020, three female and seven male pilots have been climbing and flying the highest and most beautiful mountains in the Alps under the name NOVA Climb & Fly Team (CFT). The focus is on the passion for para-mountaineering, i.e. the combination of paragliding with climbing and alpine touring. We look back on a successful year and will showcase the highlights in detail. 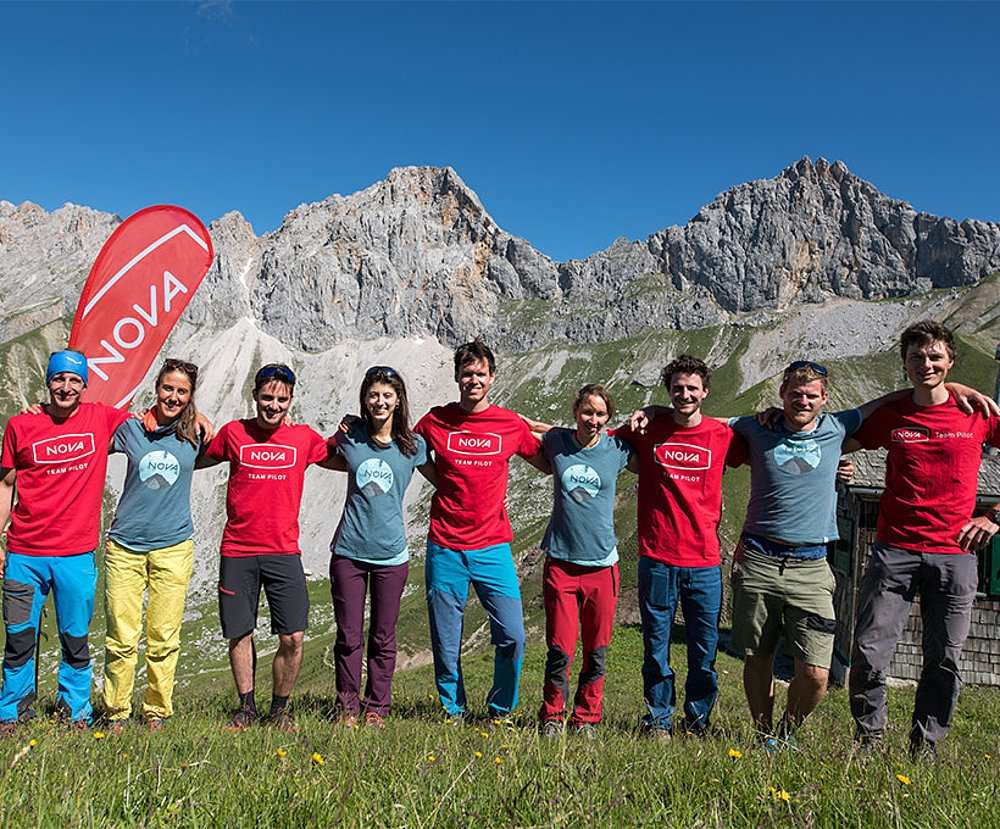 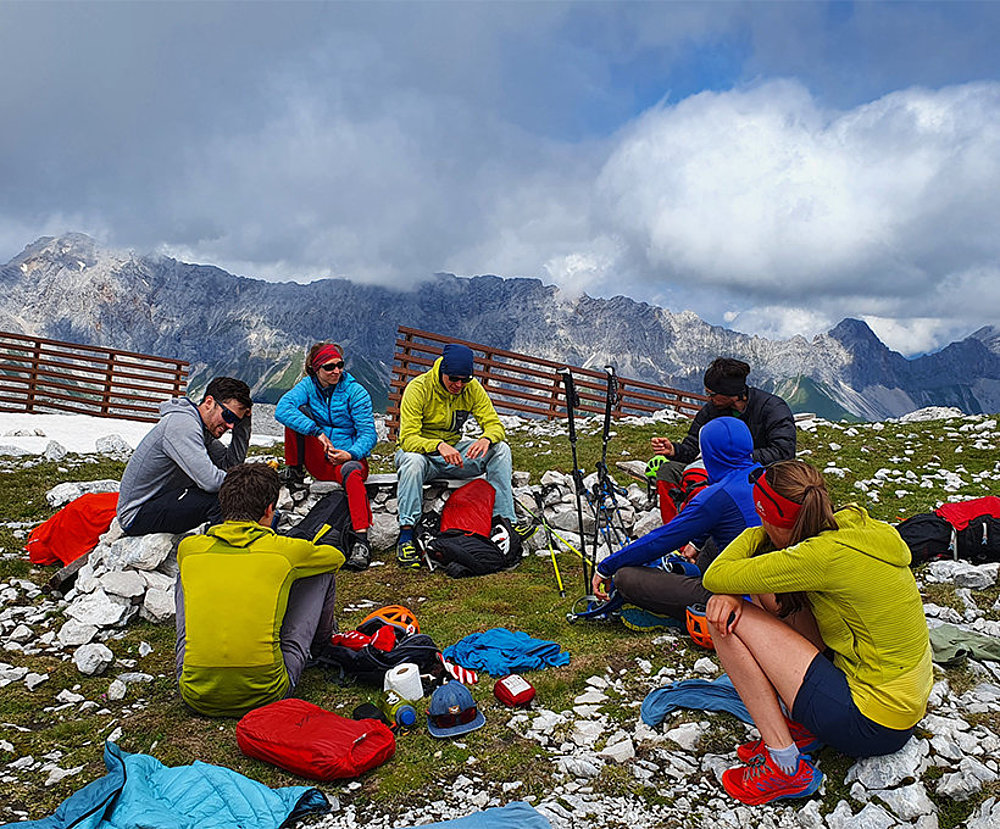 The initial meeting at the Schüsselkar mountain refuge
The first meeting of the Climb & Fly Team members was in July 2020. For one weekend the mountaineers climbed to the mountain refuge on the Schüsselkar in the municipality of Leutasch, Austria. Since it is a self-catering hut, the rucksacks were not only packed with flying and climbing equipment, but also with plenty of food and drink. Some of the CFT members met each other for the first time during the weekend - and got on well instantly. As well as the excellent weather and a great atmosphere, the first weekend was also characterised by a unique sense of team spirit. Paul Nagl: “The great thing is that we all have different skills and strengths and we support each other in flying and climbing. And of course we have a lot of fun as well.”
You can see a video on the first CFT weekend here. 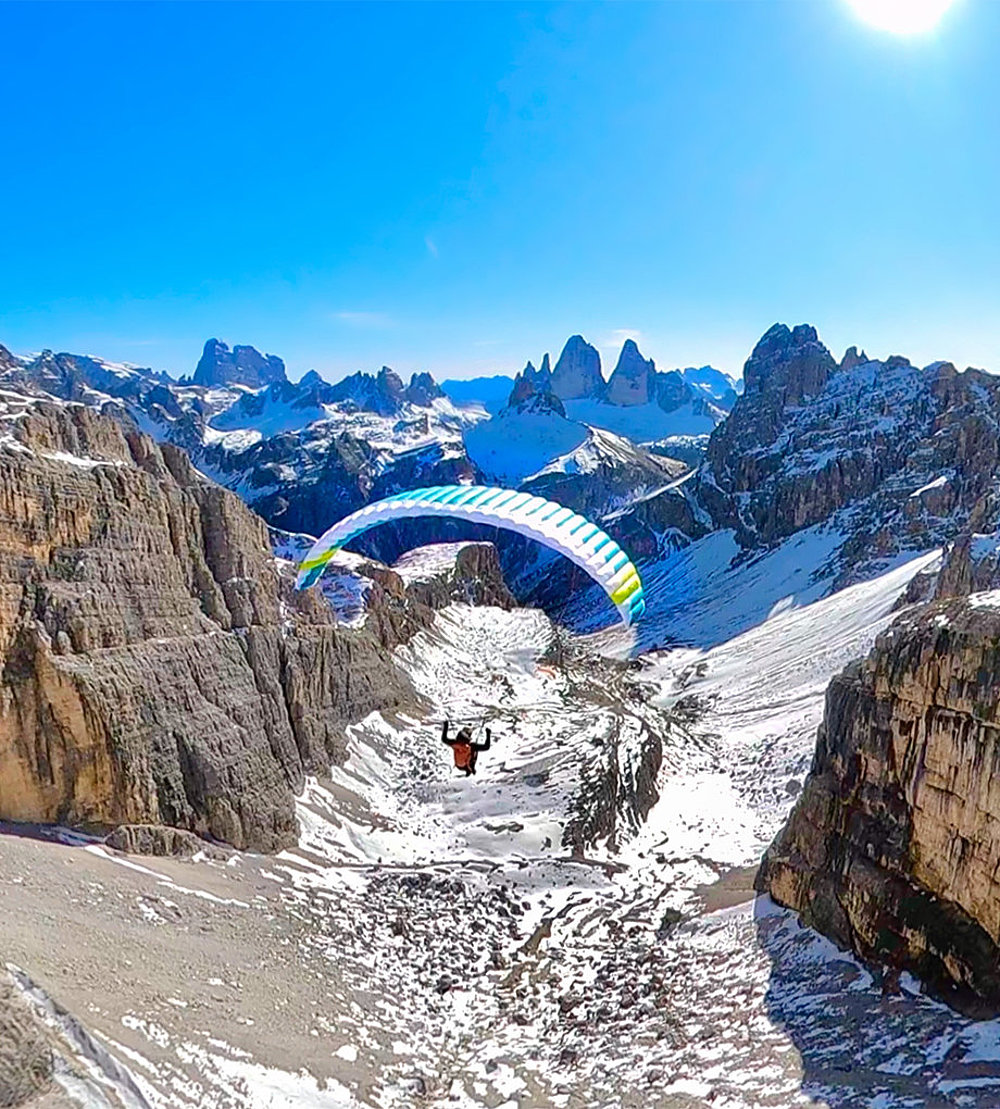 Hochebenkofel | Simon Heinrich & Manuel Ploner
The Hochebenkofel is located in the centre of the Sexten Dolomites and offers not only scenic beauty in autumn but also a certain degree of solitude. Beautifully situated between steep Dolomite walls, the trail climbs until just before the Lückelescharte, where we enter the steep section to the summit plateau. After the rocky ascent (difficulty level UIAA I), the terrain flattens and leads to the summit of the Hochebenkofel. If the ascent provided breathtaking views of the rough Dolomites, the view from the peak is even more magnificent. In addition to the Dolomites and the imposing Tre Cime di Lavaredo in the south, which seem close enough to touch, to the north are the Großglockner, Großvenediger and Hochgall. The launch is on the peak of the Hochebenkofel, which, like the rest of the peak plateau, is covered in dolomite rocks. Therefore this tour is ideal in spring or autumn, when the peak is not snow-covered. Because the take-off is quite shallow, a WSW wind is ideal. 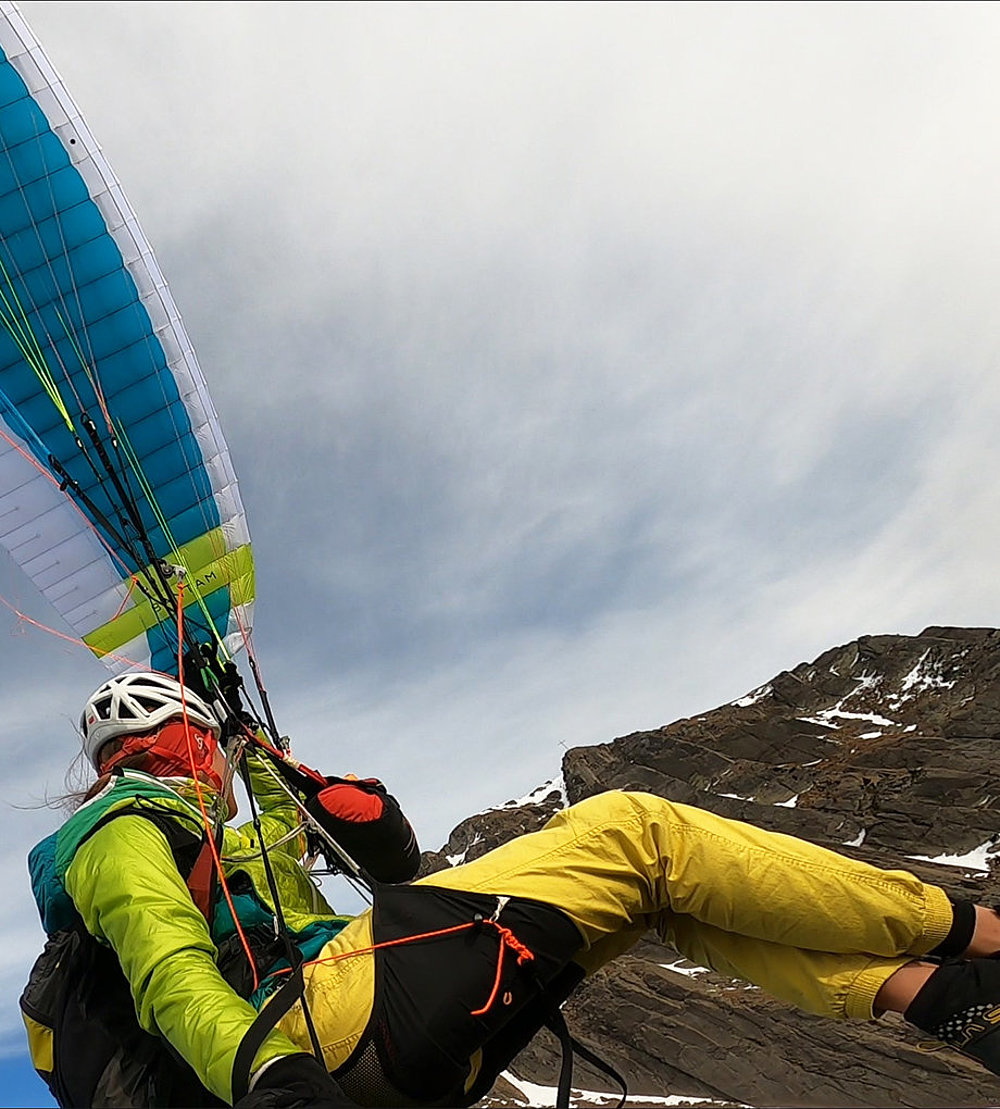 Sarner Scharte (Holzer Kante) | Alexandra Lamprecht
The start of the tour is the parking above the Riedlerhof in Sarnthein (South Tyrol, Italy). After a good hour of hiking, we arrived at the start of our climbing route. The Holzer-Kante is one of the easier tours (UIAA IV+) and one of the classic routes on the Sarner Scharte. The climbing is mostly along the edge and alternates between some quite exposed sections and the slab climbing typical of the Sarner Scharte. The weather was excellent, the air still and the temperature very pleasant. We were even alone on the climb. We enjoyed a great climb and the gorgeous autumn scenery. On reaching the top, happy and satisfied, we looked forward to what was to come next. After a short rest, we took the paragliders out of the rucksacks, spread them out and after a couple of steps we were airborne. We flew along the wall of the Sarner Scharte and saw our ascent route from above. We were overcome by a feeling of gratitude - how lucky to have all this outside our front door! We enjoyed the 1500 meter descent into the valley. 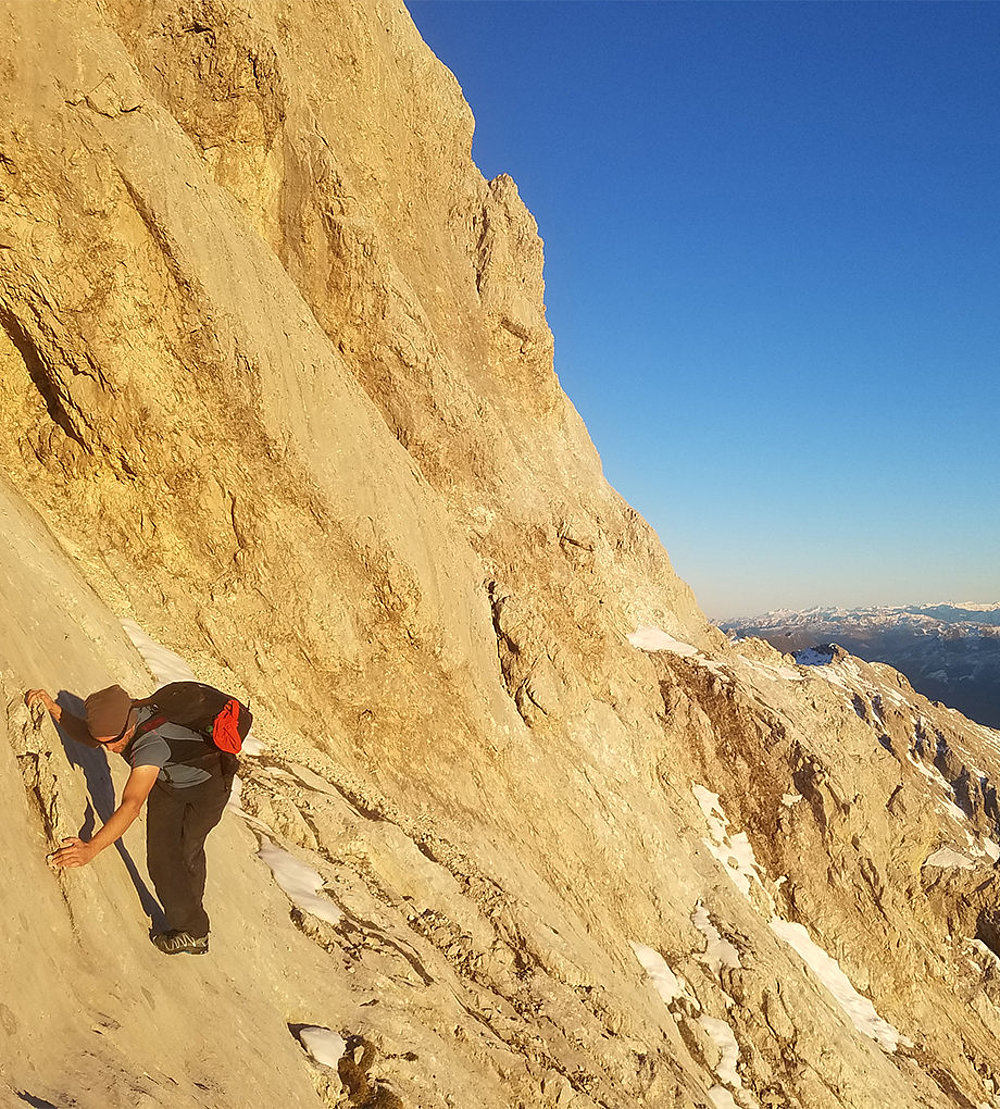 Bettelwurf Osteck (Eastern flank) | Paul Nagl & Luis Depping
Luis Depping, Pipo Medicus and I (Paul Nagl) chose the Bettelwurf eastern flank route (Nordkette, Innsbruck) as a beautiful evening tour. I had never been there and the route promised several great passages for climbing in exposed terrain. However, the plan to have plenty of time to arrive before sunset was soon jeopardised by snow and loose rock. We also worked up a good sweat on a super narrow traverse with slippery foot holds. Despite losing time, our efforts were rewarded by a spectacular launch east of the summit in the light of the last rays of the sun. A call to the Innsbruck airport contol tower for airspace clearance was followed by a quick descent with the BANTAMs, which rounded off the tour perfectly.

You can read the whole story of the Last-minute sunset launch from the Nordkette here. 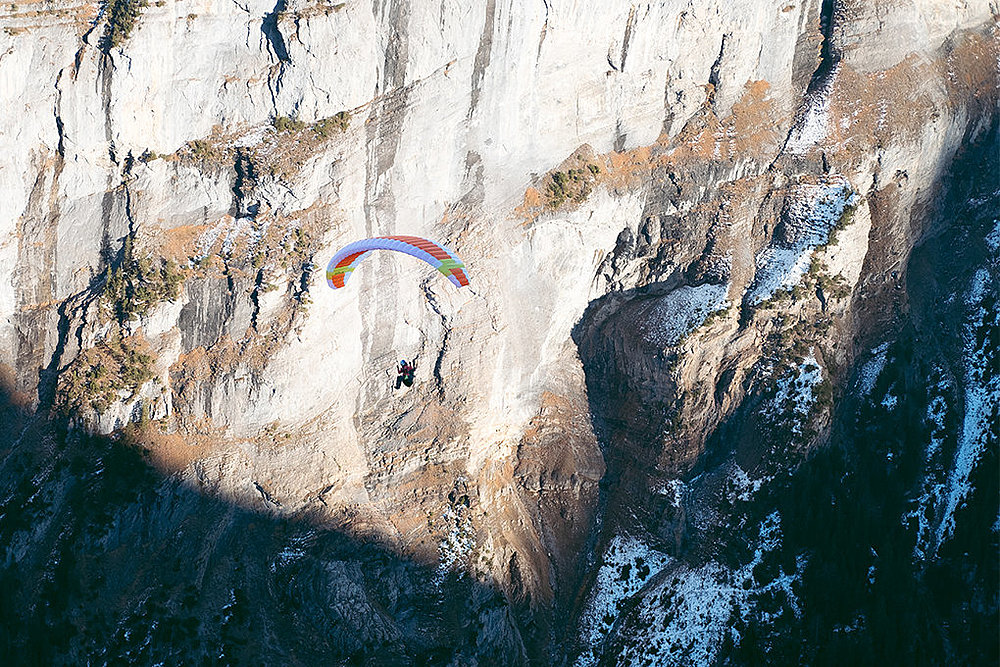 Tanzbödeli | Carla Vivó Soler
My first flight at the Tanzbödeli began my week autumnal hike & fly holiday in November in Switzerland. It is in the Berner Oberland (Lauterbrunnen) - one of the most breathtaking flying areas I have ever been to. The weather was perfect. After a hike that ascended 1200 m, mostly in snow, we launched at approximately 3 o’clock. It was a gentle afternoon flight. But what really impressed me was being surrounded by the high 4000 m mountains and seeing the glaciers so close. 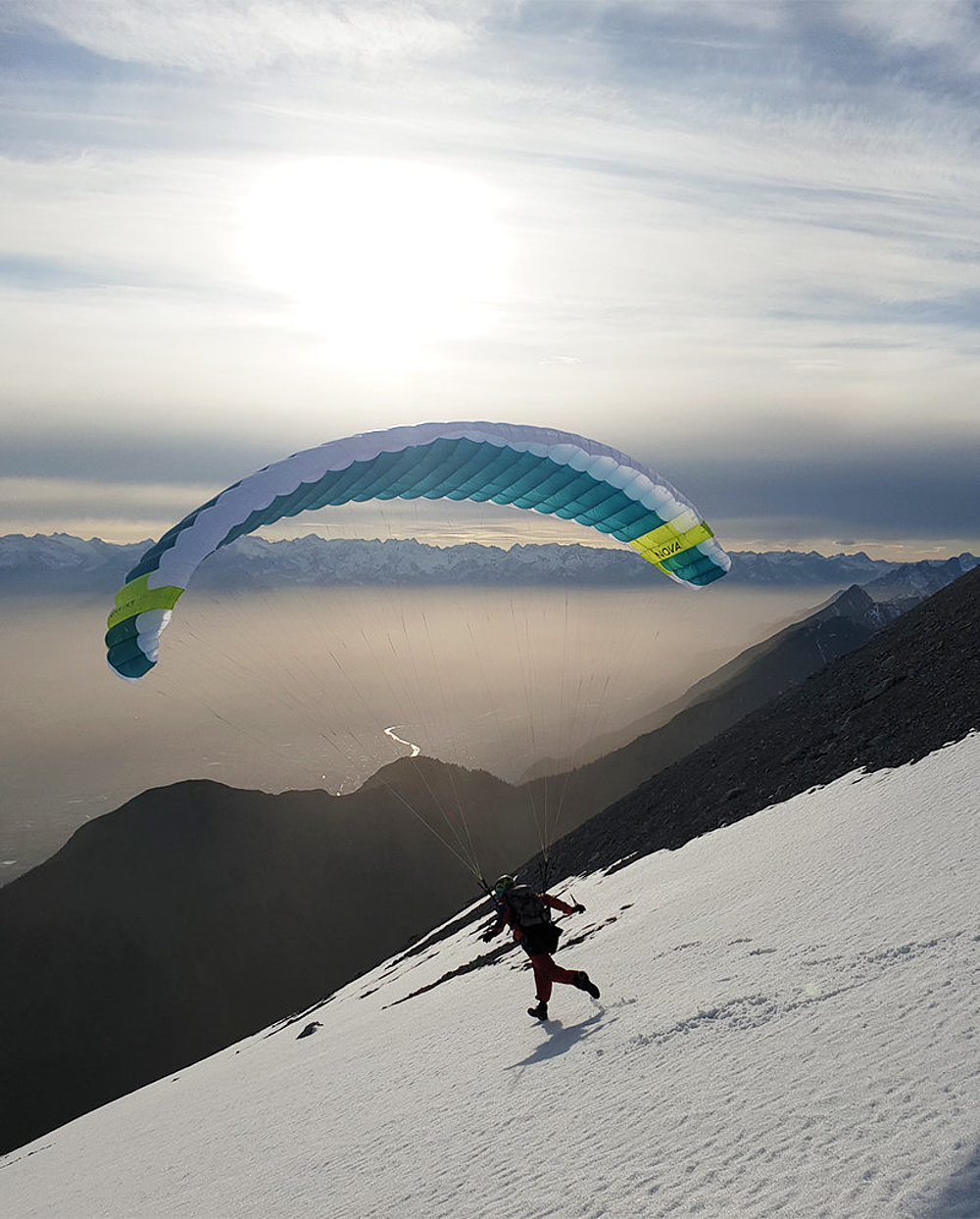 Ridge traverse Speckkarspitz - Bettelwurf | Jessica Kratz
It was time for another tour round the local mountain with Josef and Andi. After the ridge traverse of the Hundskopf via the Fallbachkartürme to the Bettelwurf last year, the opposite direction was an option. From the Hall valley we climbed the Speckkarspitze via the Lafatscher Joch. From there, the ridge to the Bettelwurf lies impressively before us, which is initially easy and then becomes increasingly challenging with some exciting climbing sections. The way-marking cairns are well disguised amongst loosely stacked rock towers. The key section, an overhanging chimney just before the small Bettelwurf, we thought at first glance ‘there's certainly no way up there...’ or maybe there is!
Shortly after, we were rewarded with perfect thermals at the launch site, with sight of the landing area in the Gnadenwald on our doorstep. The flight back… pure joy! We didn’t do too many sight-seeing circles due to the strong valley wind, and we didn’t want to miss the beer in the landing field either! 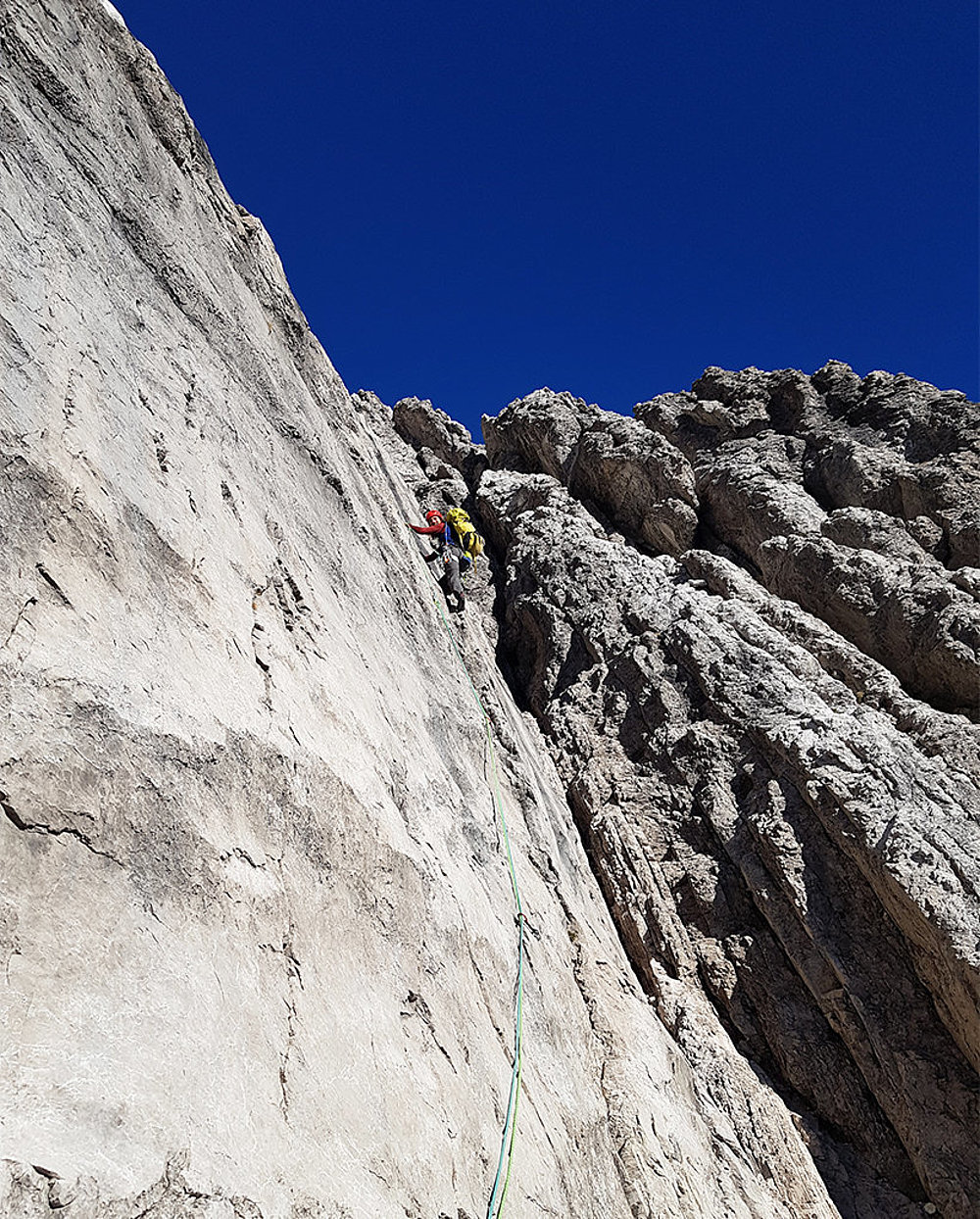 Plattenzauber | Jakob Braun
Last autumn Domi Heinrich and I (Jakob Braun) spent a Sunday doing the Plattenzauber on the Hintere Platteinspitze near Imst in Tyrol. The climbing route has 20 pitches with a difficulty range up to UIAA VI+ and then a 180 m ridge ascent to the peak. During the steep pitches you hardly notice the weight of the BANTAM and MONTIS in your rucksack. If you feel comfortable in these grades, you will find a perfectly secured bolted route here. After about 4 hours we had plenty of time on the peak to enjoy the view into the Bavarian flatlands and the main ridge of the Alps. The Hintere Platteinspitze offers launch possibilities on sloping gravel terrain to the south west and reliably provides lift in the afternoon when the weather is good. For me, the BANTAM is the perfect mountaineering tool with which I also feel comfortable at such alpine launch sites. We had a gorgeous autumn day and were able to perfectly combine our favourite summer sports of climbing and paragliding.

You can see Jakob’s video of the Plattenzauber here. 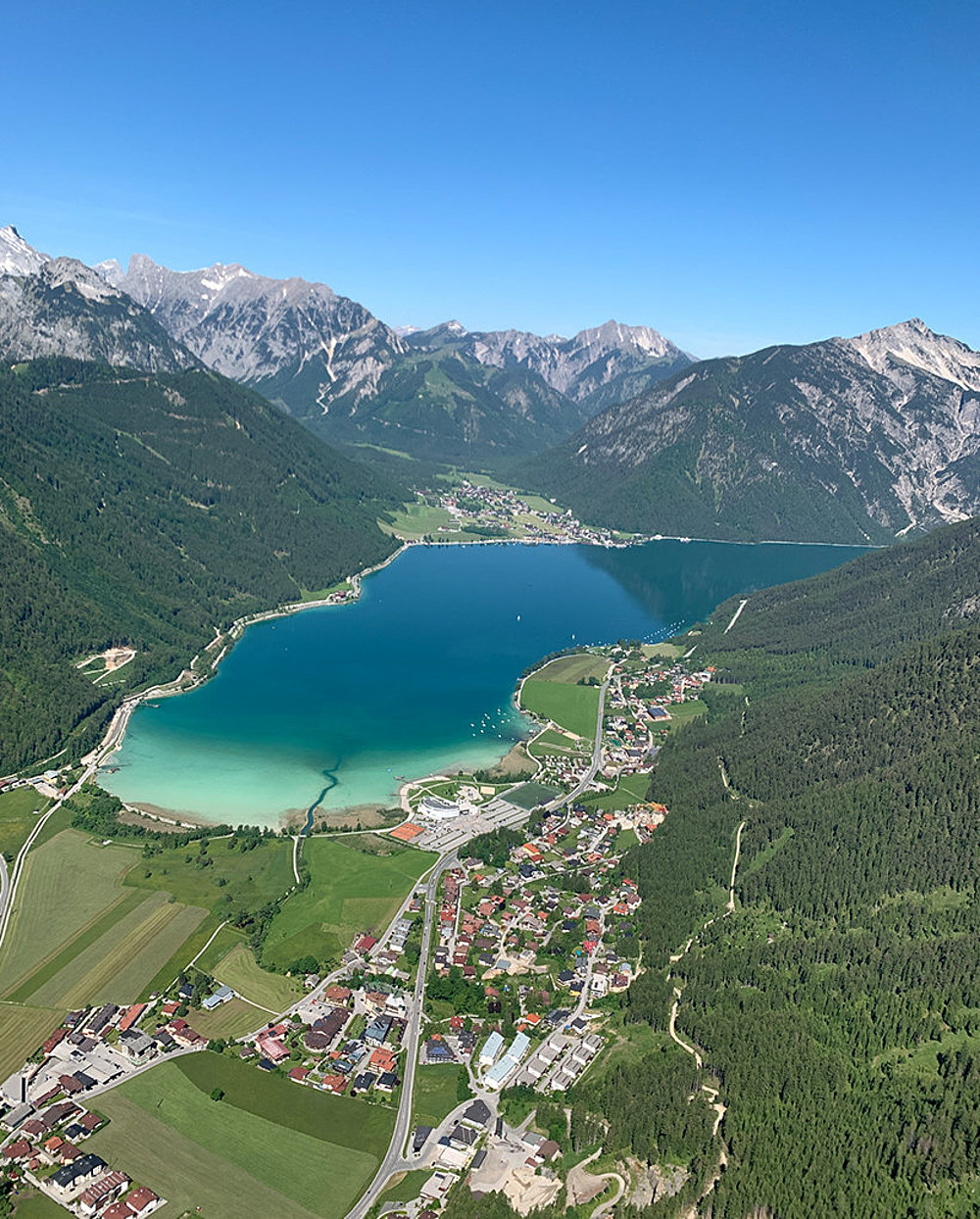 Haidachstellwand | Fabio Keck
The village of Maurach on the Achen Lake (970 m) is one of the many starting points for a tour up the Haidachstellwand in the Rofan mountains (2192 m). Three different routes lead up to the summit (which is also one of the 5-summit via ferratas), or even more if you want a multi-pitch climb. The ascent to the summit is possible from the rear via a footpath and a via ferrata leads upwards on the north shoulder. I recommend the ascent via the south shoulder. Here you hike along the beautiful ridge and only towards the end there is a short rope-secured section. The plateau at the front offers enough space to take off and in most cases the wind on the sun-facing slope comes from the front or slightly from the left. The flight along the mountains and over the mountain station of the Rofan cable car opens up a dreamlike view of the Karwendel mountains and the Achen Lake. The large and easily identifiable landing field is immediately next to the roundabout in Maurach.
I am from Pertisau on the Achen Lake and I can always see my home during the flight. And I also like this tour because you ascend enough to earn yourself some cake ;-) 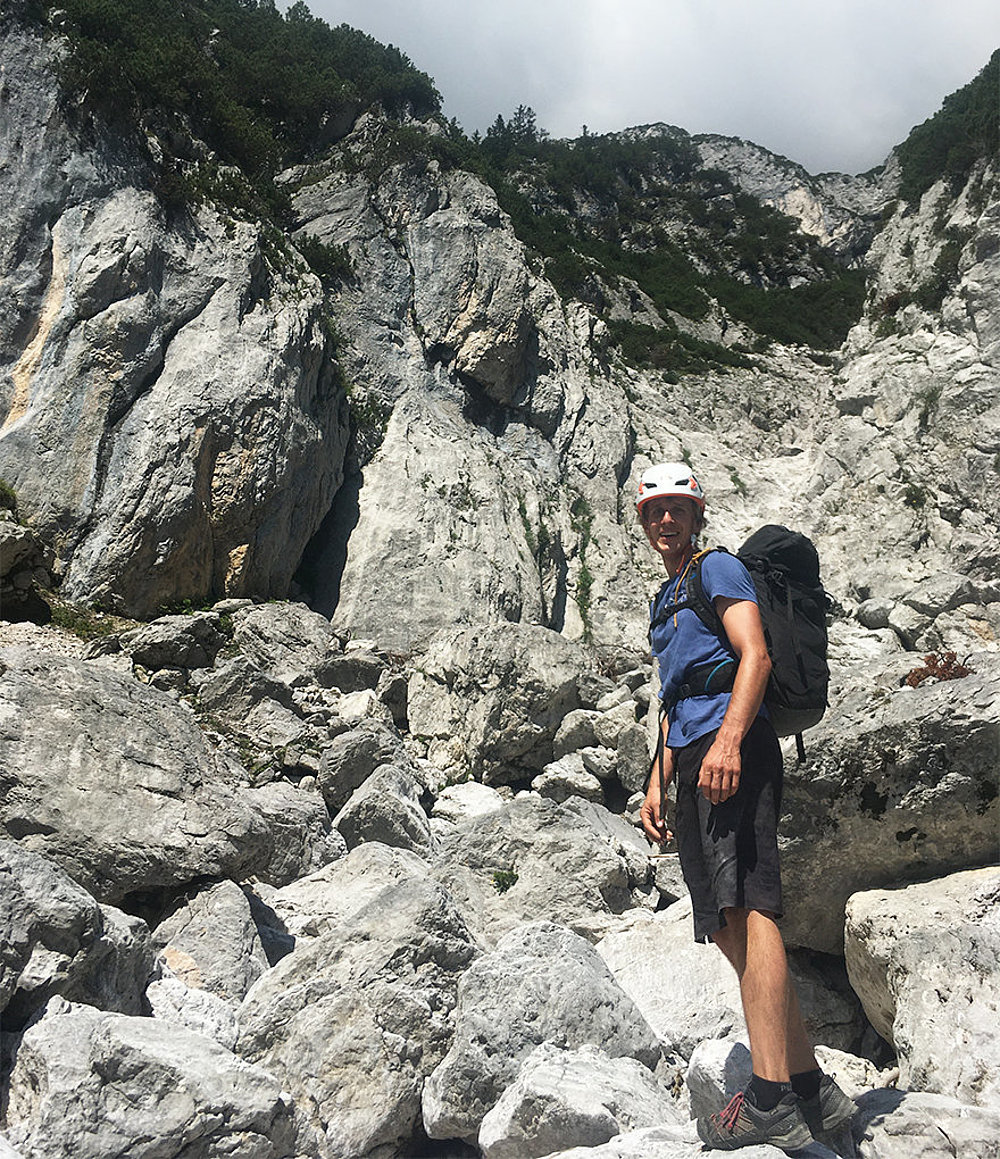 Grieslehnrinne | Christof Happ
The Grieslehnrinne (Telfs, Tyrol) is a very special climbing route - not particularly difficult, but very distinctive and quite alpine. The route follows a washed-out stream bed to over 1700 m from Telfs directly to the west summit of the Hohe Munde. This makes it more of an endurance tour and making forward progress can be described more as "endurance crawling". The round rock channel, deeply cut by the rain, is particularly pleasant to touch and sometimes you have wedge yourself in and push your way up the large natural slide using friction, but this is much more fun than it might sound here. And finally, once again it is this wonderful contrast of hours of movement in a breathtaking landscape and the final gentle and, compared to the ascent time, very short descent into the valley with the BANTAM. Thanks to its extreme lightness, it proves to be an inconspicuous and effortless partner when climbing and, when flying down, allows for completely new breathtaking perspectives on the metres of rock that have just been climbed.

Here is Christof’s video of Climb and Fly at the Grieslehnrinne. 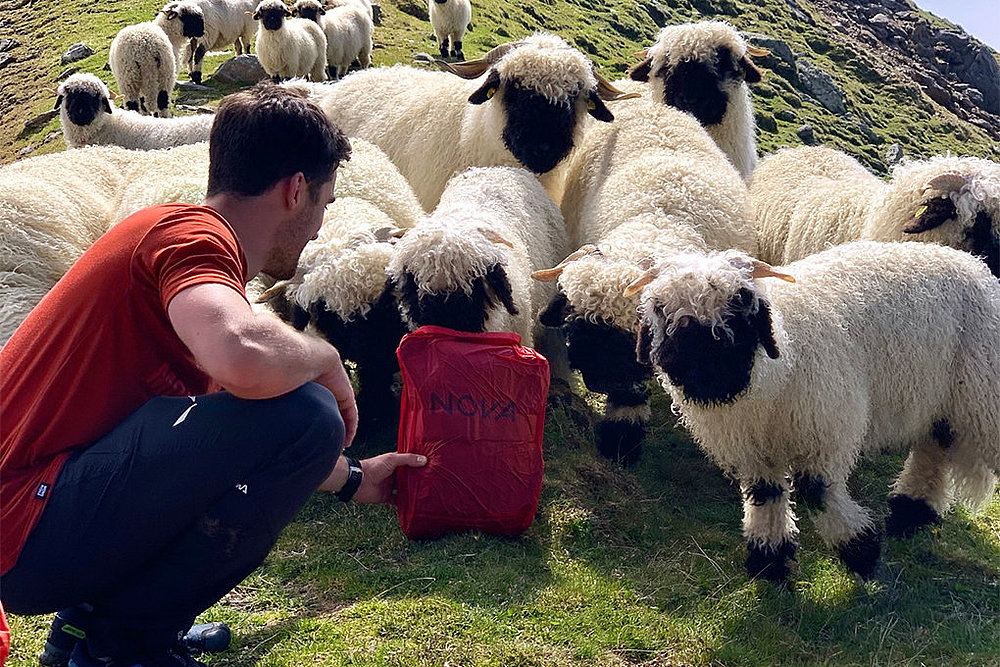 If you would like more information on any of the tours, please send your questions to paul@nova.eu.