Last-minute sunset launch from the Nordkette

What do our NOVA colleagues do in their spare time? In this case the answer is hike, climb and fly over snow and rocks and launch at the very last minute. Paul, Pipo and Luis had an unforgettable adventure at the Bettelwurf – the highest peak of the Nordkette, near Innsbruck. Paul reports about the traverses, slippery holds, loose rocks and timing when the sun sets so early. 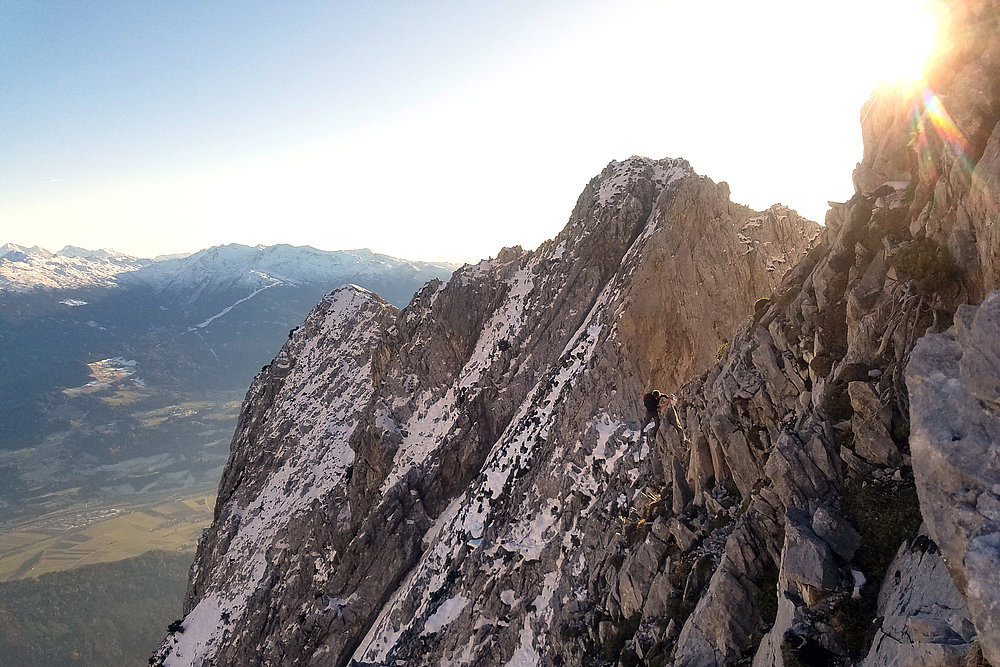 Last weekend (note: in November) we set off with our BANTAMS for what we thought would just be another hike & fly among the many we did this November. We had set our sights on the Bettelwurf Osteck which is a route up the Bettelwurf which follows the east ridge all the way to the summit. I had never been on the Bettelwurf and also the east ridge promised some nice scrambling/climbing on exposed terrain. Pipo, Luis and I started hiking at around 11:30 am. We chose that time because we had calculated that we would reach the summit around one hour before sunset, which would give us some time to enjoy the views and take some pictures. Obviously, things didn´t quite go according to the plan. 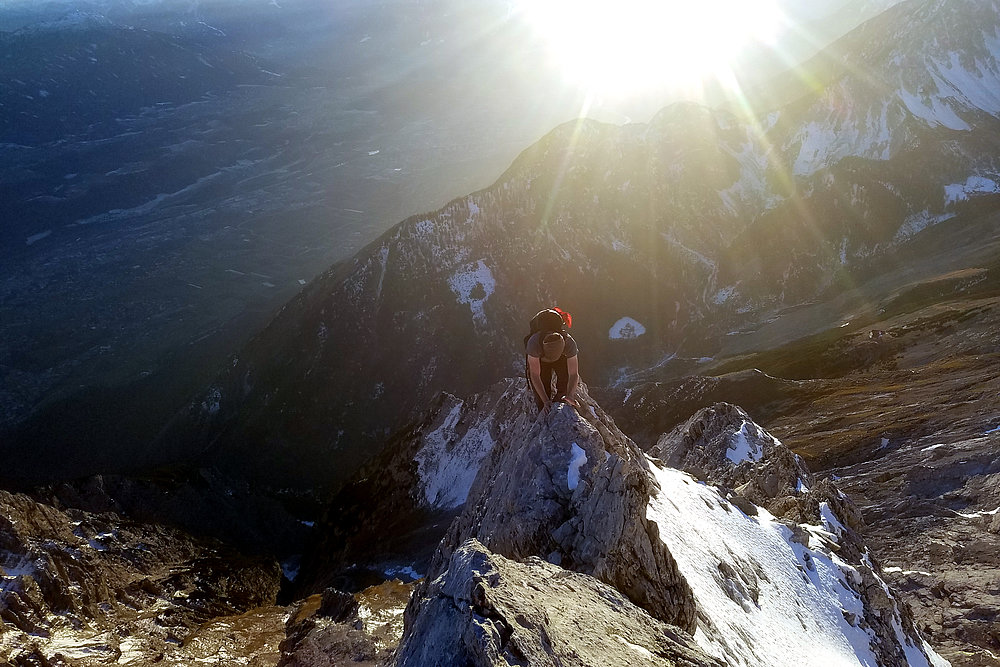 At around 2 o’clock we reached the Wechselspitze, a little peak that marks the beginning of the east ridge. The autumn sun warmed our faces and we set off in high spirits along the ridge. However soon after our progress was slowed down by some snow in the steeper passages, but our excitement kept us going and we didn´t mind the time loss so much. Halfway up the ridge we turned a corner and stopped short. Ahead of us lay a traverse of only around two or three meters. 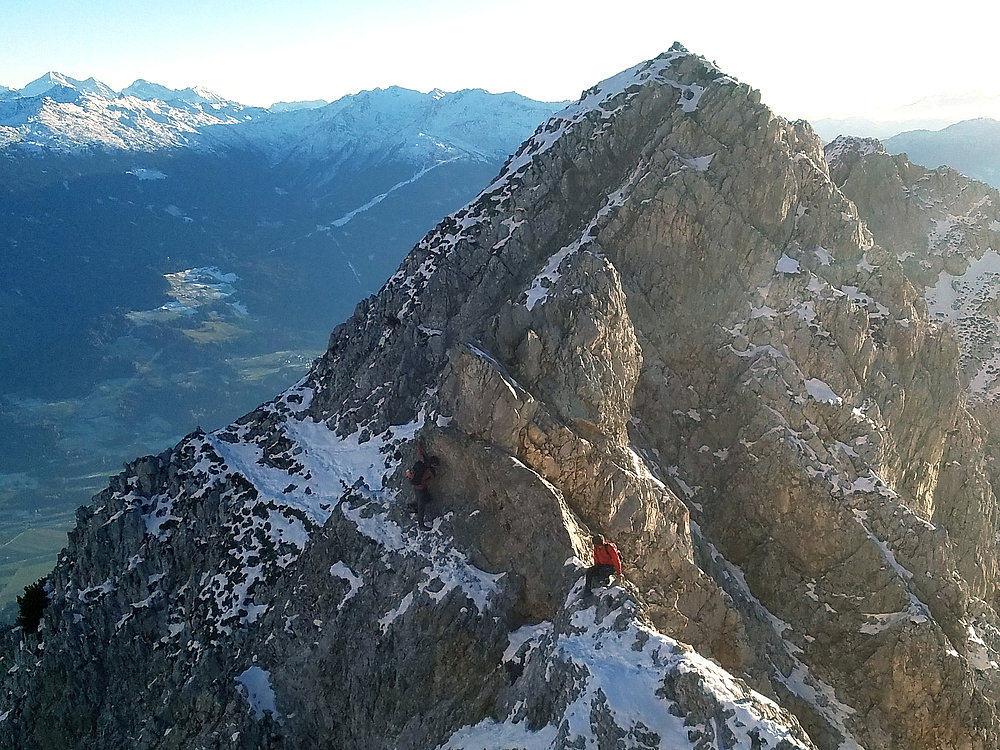 The problem was that the snow and some loose rock made the traverse hard to predict and a mistake would leave us tumbling a couple of hundred meters to the Fallbachkar. We discussed a couple of minutes whether we should try it or turn around and then chose to give it a go. One by one we slowly managed to creep around the corner on slippery footholds and loose handholds (picture 3). Relieved, we negotiated some easier terrain before the real climbing started. Concerned about the time and also not feeling super good, Luis decided to finish his hike then and launched of the ridge in a routine manner. Knowing the conditions and his BANTAM the small, rocky launch site was not a problem for him. 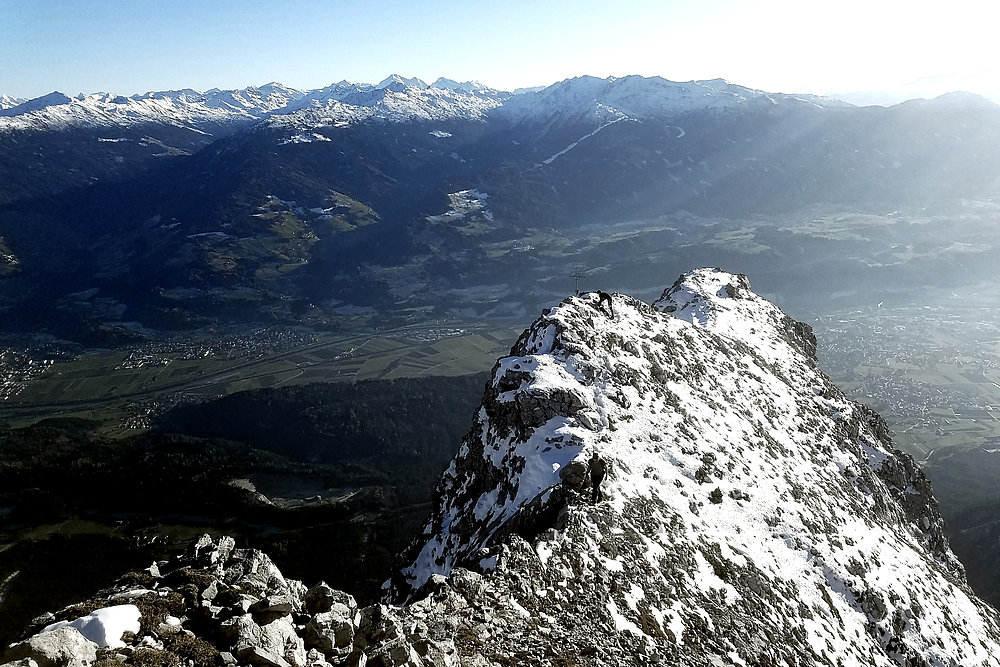 Pipo and I decided to try our luck in reaching the summit before sunset. We pushed on as fast as we could and were rewarded with good quality rock glowing in the warm light of the evening sun. The actual crux of the route (picture 4) didn`t bother us after the scary traverse earlier that day. We really enjoyed the amazing climbing to the top and just reached the summit when the sun was setting. 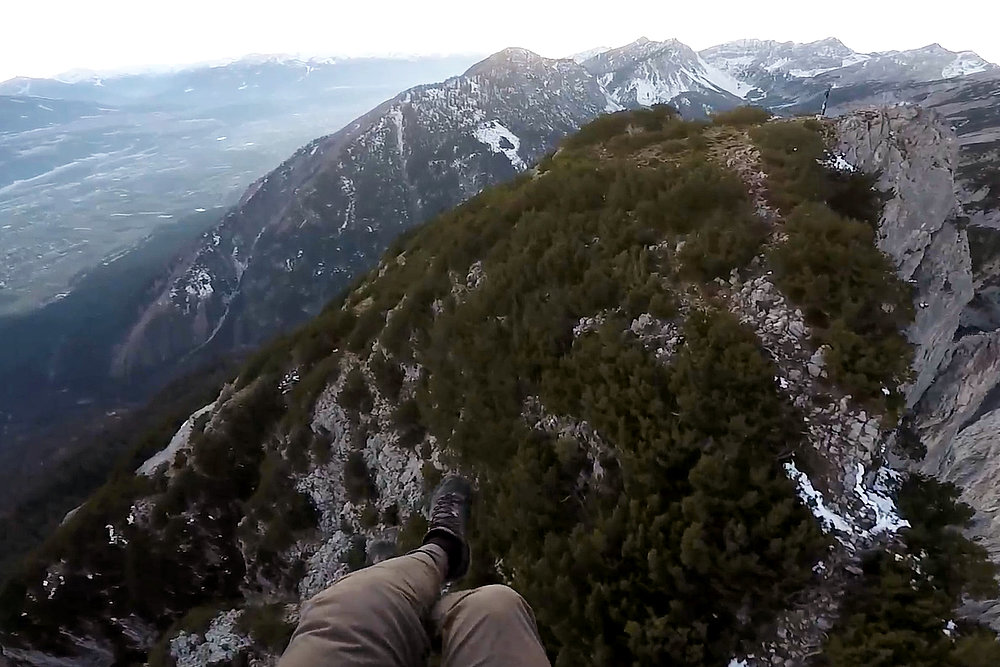 Things got a bit hectic when we realised that without the sun our take-off site would be almost impossible to launch from due to tailwind. Neither of us wanted to face the 3 - 4 hour hike back to the car in the dark and over demanding terrain. With his phone tucked between his shoulder and his ear, Pipo managed to spread his wing while calling the tower in Innsbruck for clearance. Five minutes after arriving at the summit and two minutes after the sun had set we managed to launch. Just in time for the very last thermal breeze coming up the slope. The flight down with our BANTAMs was just pure joy! I will certainly remember this hike/climb & fly for a long time. I am super grateful for all those experiences especially with such nice folks around me.

Click here to watch the video of this flight. More photos and videos of Paul & colleagues at NOVA Instagram/Facebook.