Long-awaited and postponed again and again due to Corona - eventually it finally worked out: the NOVA Flatland Team (NFT) met in Siegritz (Frankonia) at the beginning of May to winch-tow and celebrate together! Ralf Böhm reports on an extraordinary weekend with lots of flying, laughter, barley juice and more... 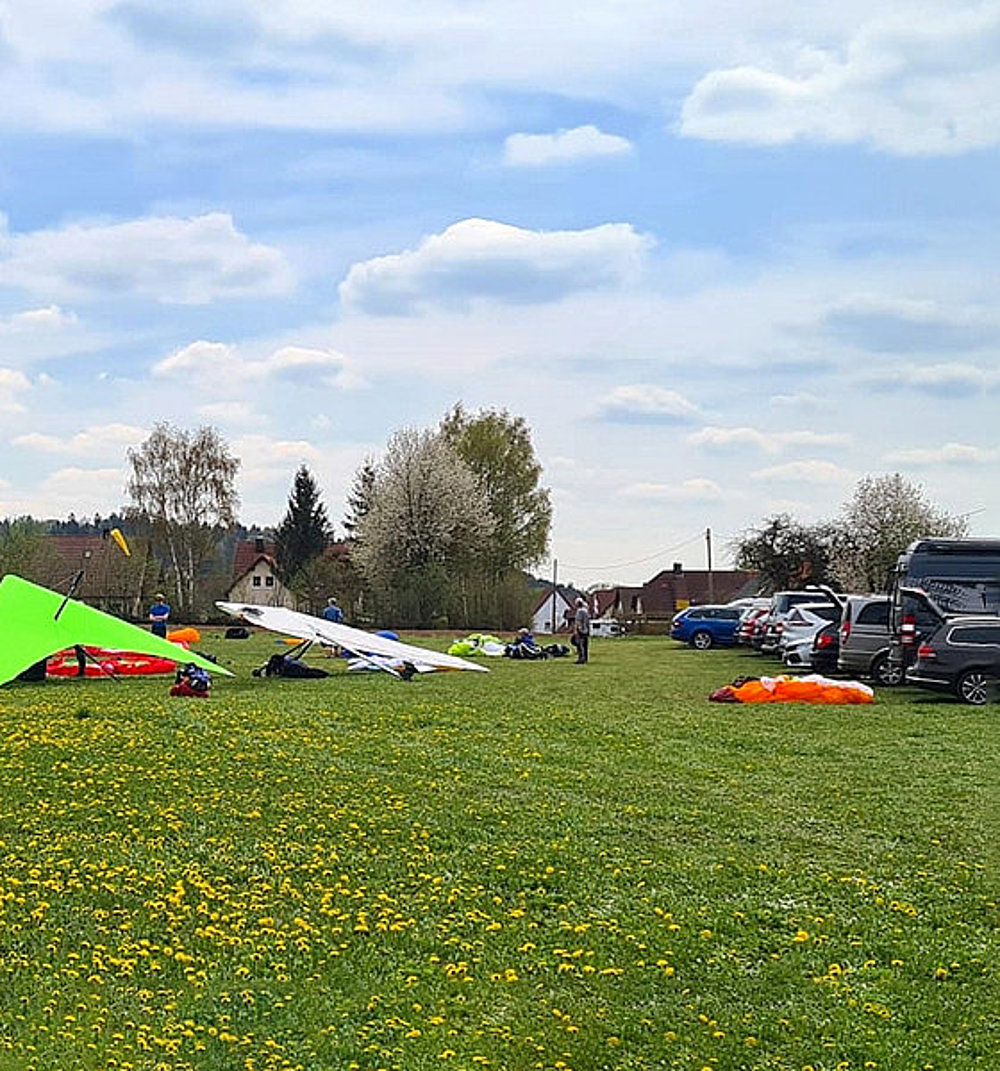 On the eve of the NFT meeting, I, as the flying site coordinator of the Drachen- und Gleitschirmfliegerfreunde Rhein-Mosel-Lahn e.V., plead at our annual general meeting for the sale of our winch, as there has been no decent towing operation for years. Why should we keep it? We now have natural takeoffs for almost every wind direction on the Rhine, Moselle, Ahr and Lahn. At that time I would not have thought that two days later I could think differently about towing...
It's not until after midnight that I get home from the meeting. I decide to start the weekend for the team meeting well rested and stress-free. So I arrive at the busy Siegritz towing site at around 2 pm (at least I was able to use the long journey to brush up on the towing commands, among other things). 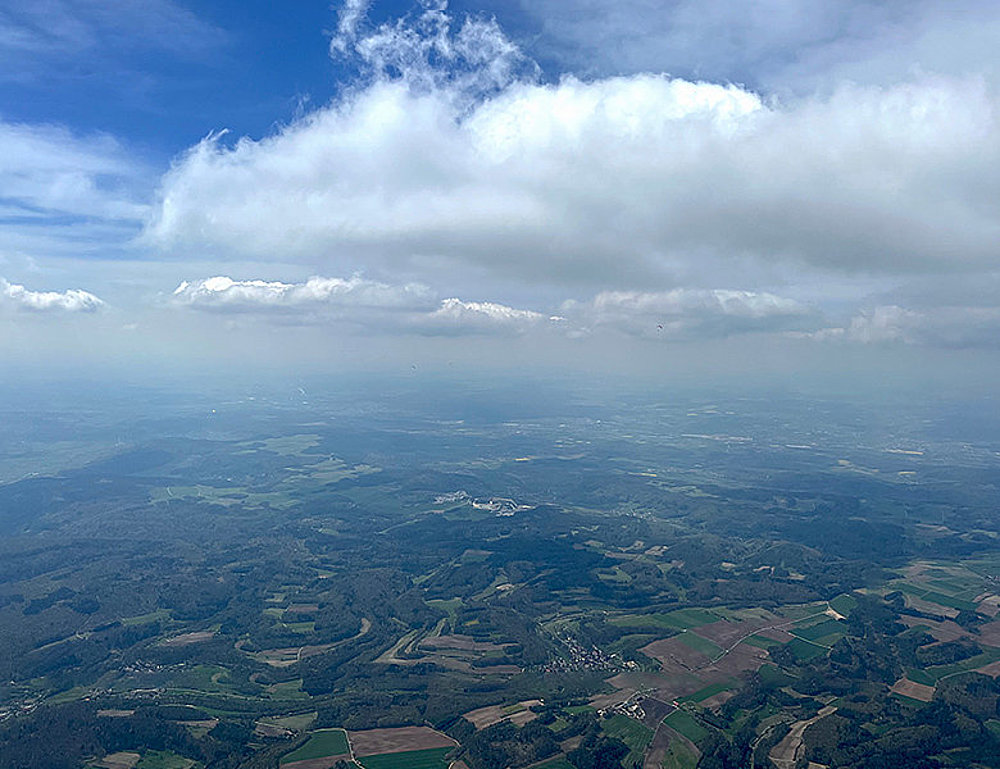 Looking for familiar faces, I was surprised to meet Valerij Volkmann. He used to live with us in the Rhineland and now lives in Bamberg. What a warm welcome: Valerij immediately wants to invite me over for the evening and is already making plans for the weekend. He immediately sends his wife a selfie of us. I tell him about my actual NFT-mission and immediately I get a short briefing on the terrain and first cross-country flying tips. Valerij then heads home, as that day was not what he had hoped for. The day before he flew 111 km free distance from Siegritz! 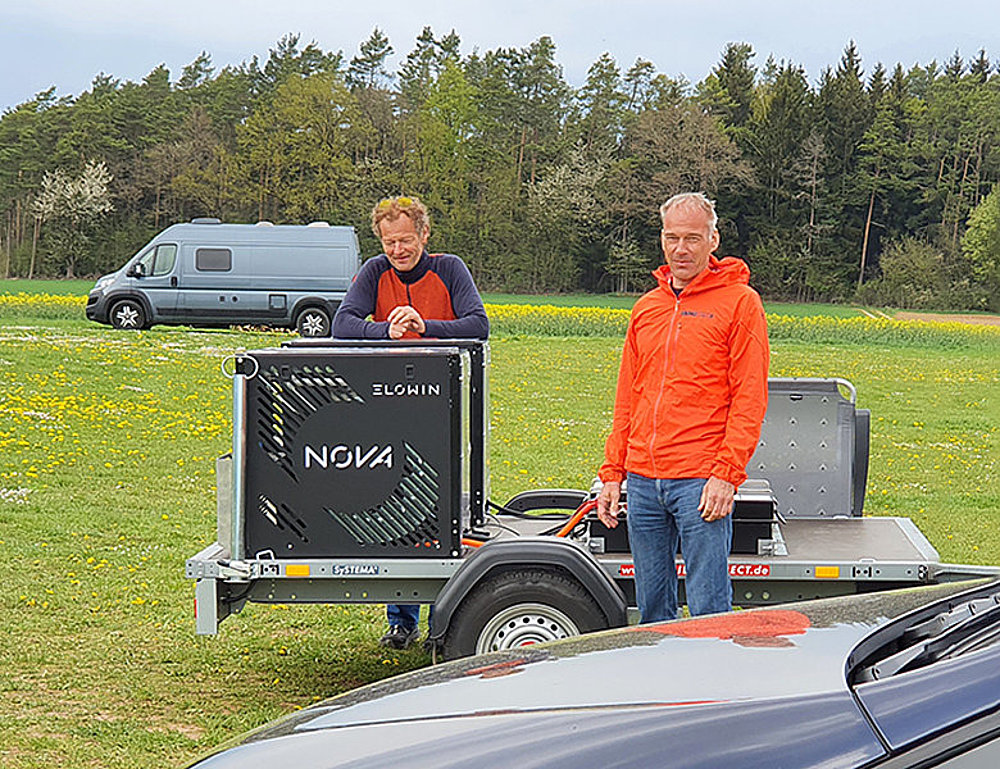 So I continue to look for my team colleagues - and then I find them: Rupert Kellnhofer from the Bavarian Forest is standing on the rope waiting for his tow. A warm hello and a short exchange and the ELOWIN pulls him into orbit. I continue to look around. Between about two dozen hang-glider and paraglider pilots I meet NOVA boss Christian Wehrfritz. A nice conversation ensued and I was told that NFT Captain Thoralf Hase (Dresden), Andreas Ziegler from the southern Black Forest and Johannes Jakobi from the Swabian Alb had already been circling over Franconia since noon. They take advantage of the best day of the weekend and ultimately fly more or less together one-way to Würzburg, 100 km away. 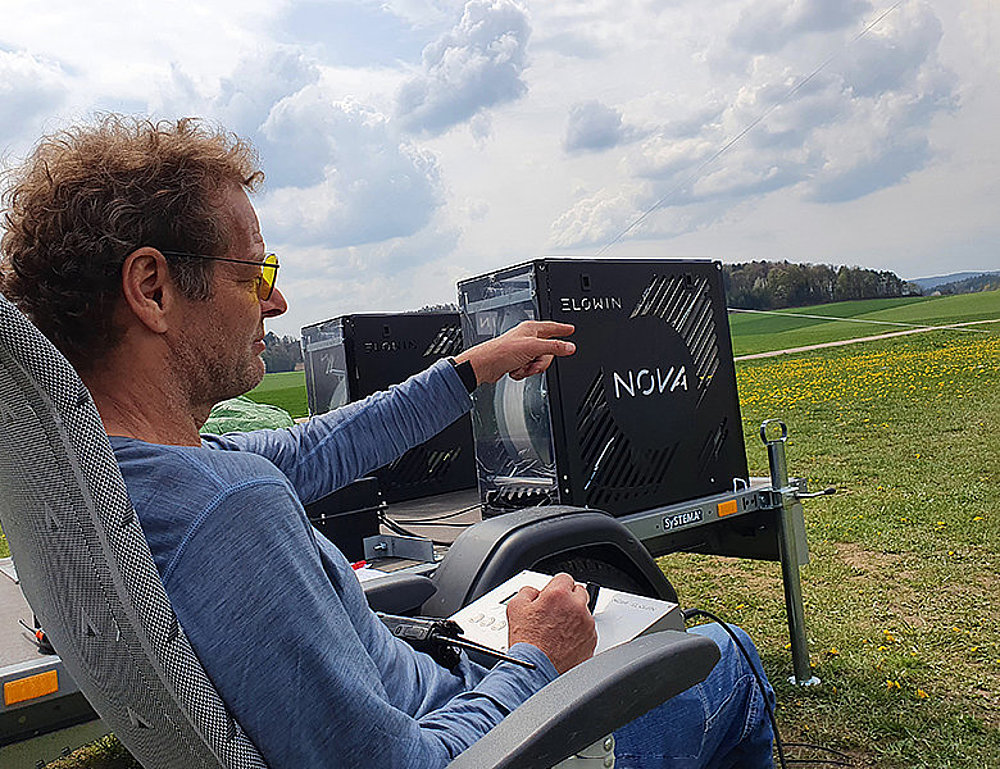 I have a completely different problem: How do I get into the air at all? I haven't been on a rope since 2003. And my last flight on the winch ended with a ruptured cruciate ligament after a stumble... Totally tense, I report to the launch manager with my old FreeX tow release hooked in and explain my (overstrained) situation. "Everything is no problem. Just take it slowly. We'll manage. Do you know the commands?" Ready! Take off! And up we go, gently. Who would have thought it? Was it so gentle and easy in the past? And then comes the best part: I clip out and shortly afterwards fly directly into the lift, which reliably takes me all the way to the base. 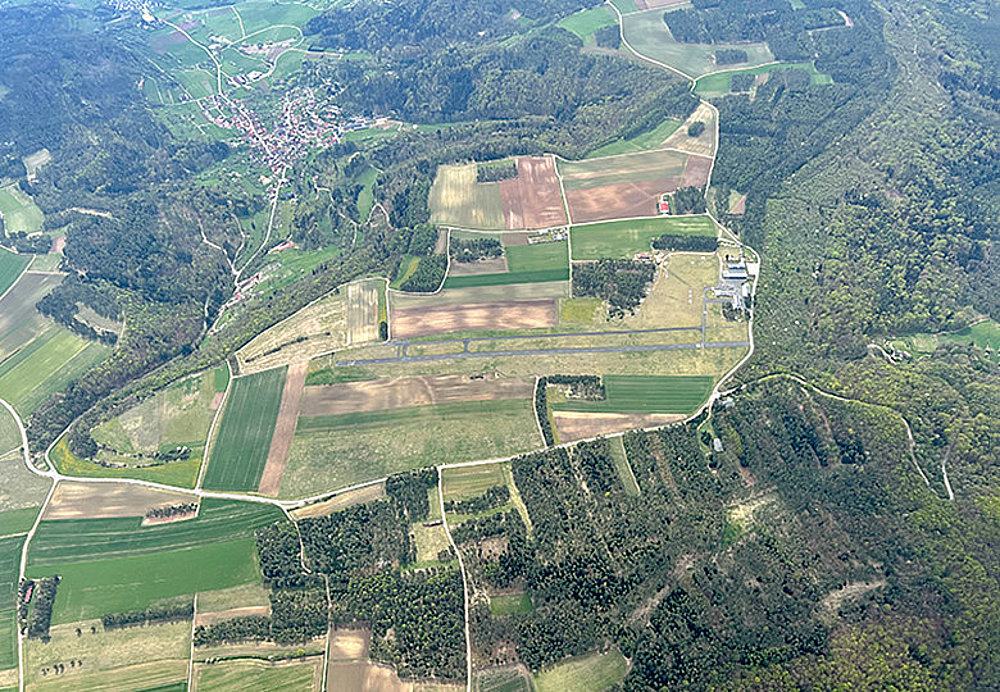 All tension falls away from me and I just resolve to enjoy this flight and stay up there as long as possible. With Valerij's words in my ear, I set off and tinker with a little flight task. I enjoy the view of the lovely hilly landscape with forests and meadows and its small villages, peppered with the odd castle or rock formation as the icing on the cake. After all, I manage a 40 km FAI triangle and land next to my car. So, this is how winch flying works! It really has something! 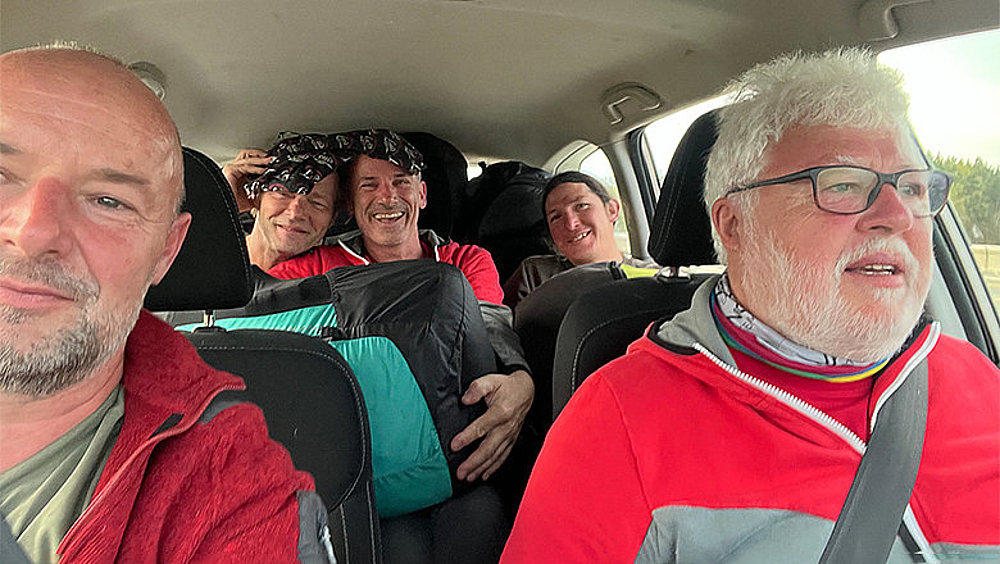 Rupert is already on his way to Würzburg: He doesn't miss the opportunity to take over the shuttle service for the three guys of the team and another pilot - even though he has to return home in the evening. 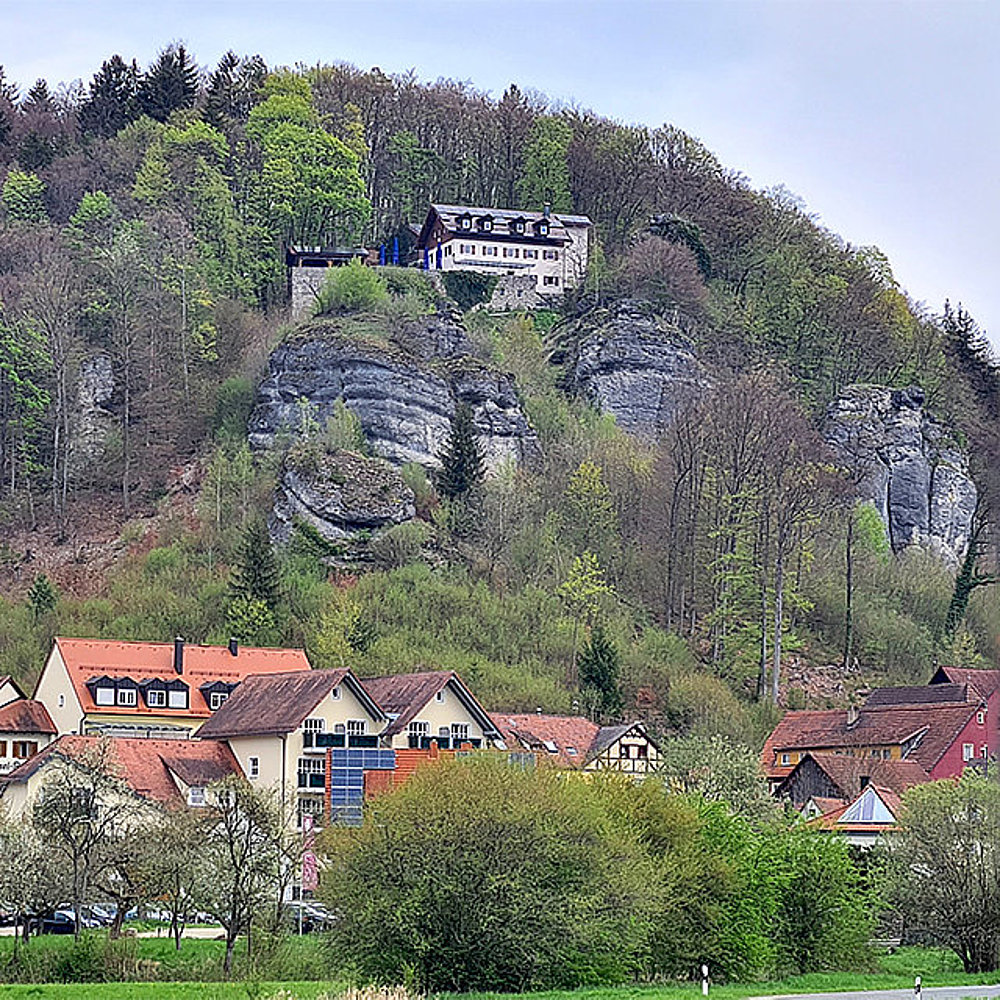 While I enjoy my cool landing beer, Torsten Selig from Leipzig appears with his campervan. He was able to use this and the previous day for flying in Altes Lager (near Potsdam). As the returnees are still waiting, we both walk to our accommodation: the Naturfreundehaus Veilbronn - situated on a climbing rock - with a view into the Leinleiterbach valley. Thanks to Andreas for finding and organising this accommodation! What a great location! Soon the "Würzburgers" arrive. We sit together on the panorama terrace and enjoy Schnitzel and Schäufele and Franconian beer. German-Spanish-Portuguese-Brazilian flying talk brings an eventful day to a pleasant close. 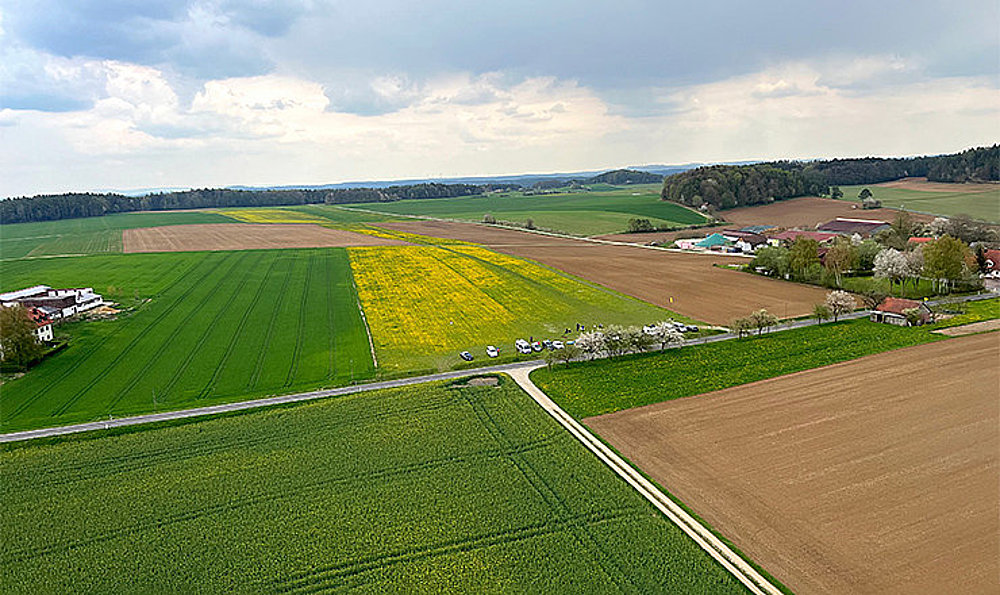 Only for Rupert, unfortunately, is it going to be exhausting: as already mentioned, he has to leave us again. Duty calls! As chairman of the 1st Paragliding Club Bayerwald e.V., he is responsible for organising both the rescue packing and the annual general meeting the next day. 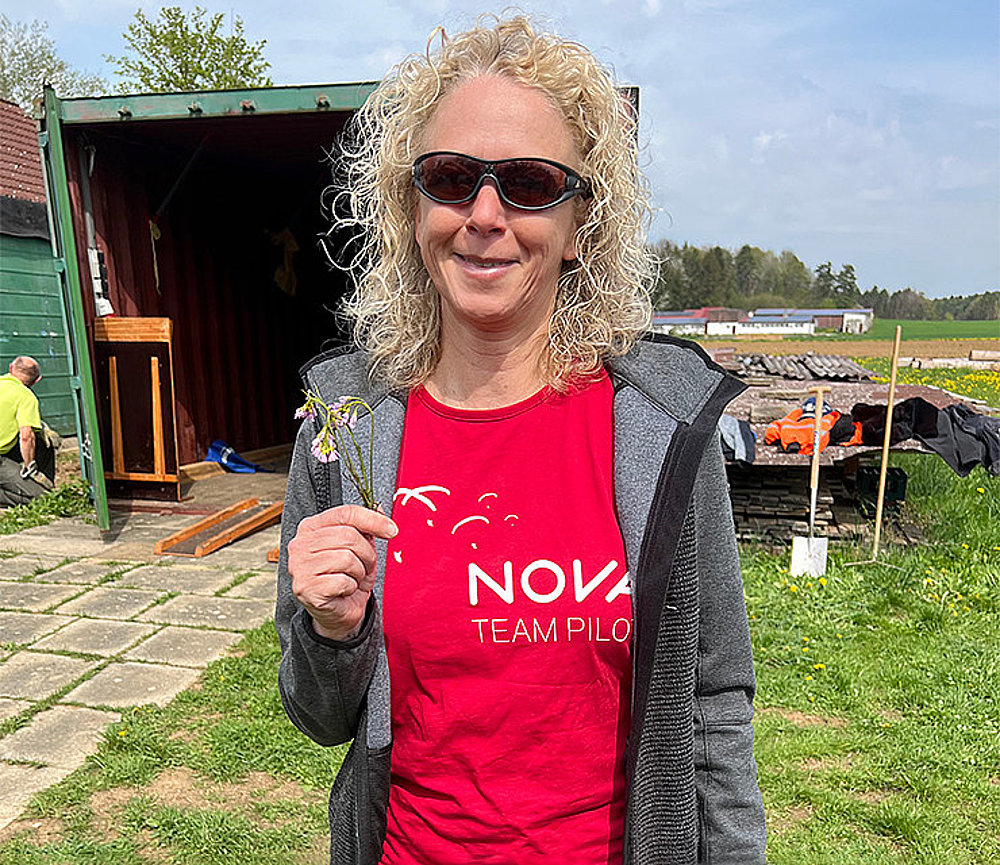 On Saturday morning we "boys" welcome the already eagerly awaited "Principessa" Monika Gschwendtner, also from the Bavarian Forest, with a self-picked bouquet of meadow flowers. We would also have liked to have Markus Kaup from Münster with us. The day before, he had parked his microlight at another airfield so that he could set off shortly after six o'clock in the morning on the more than 300 km long journey to the south-east. Unfortunately, he fails because of the bad weather area that cannot be flown around, which lies exactly between him and us. He has to turn back with a heavy heart. A real pity, but: Safety First! 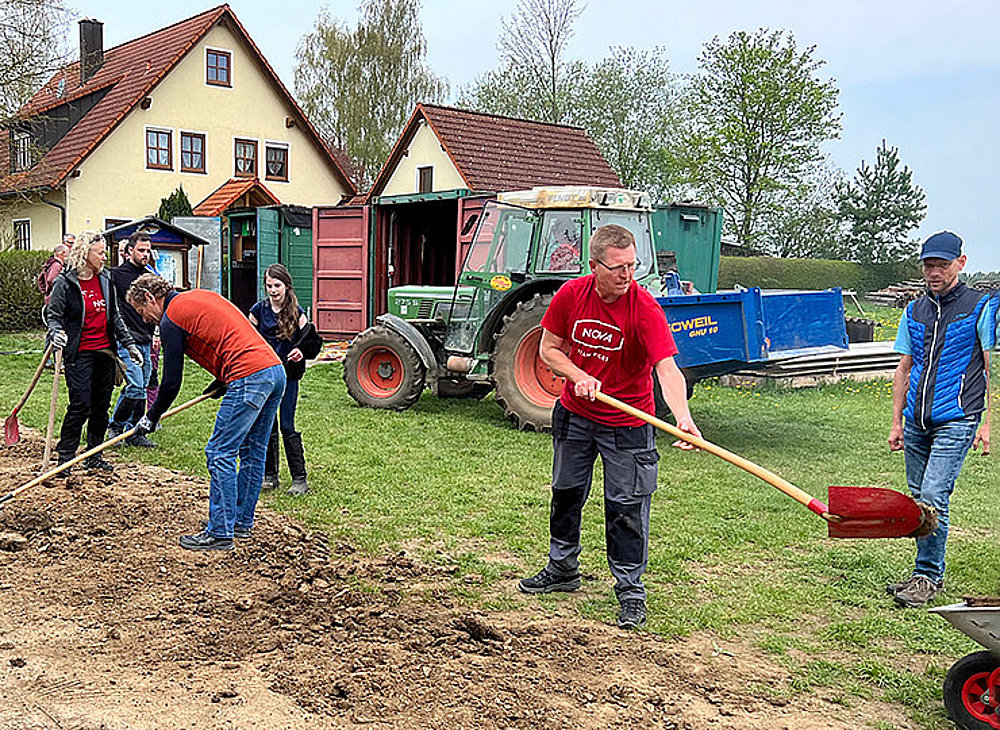 At ten o'clock we meet at the towing area and first of all actively support the local club "Nordbayerische Drachenflieger e.V." with a work assignment scheduled for that day. Together we swing shovels, picks and brooms. Soon the work is done and meat loaf and beer are ready. On the other side, however, the prospect of more flights beckons. We decide on the second. In the meantime, another - and for this weekend the last - team member, Marcus Hartmann from the Rhön, has found his way to Siegritz. 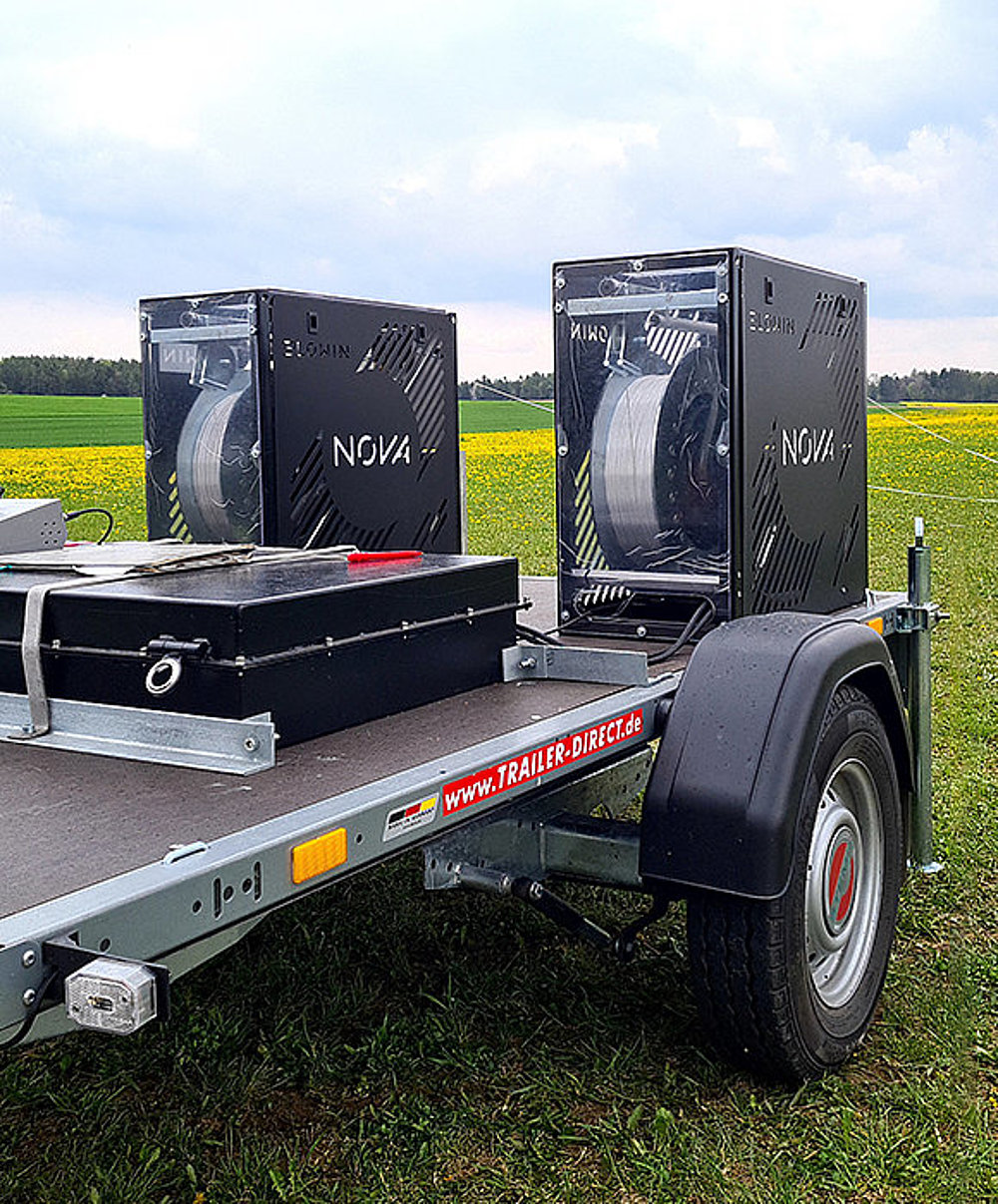 Thoralf – supported by music from the eighties – takes over the towing with the ELOWIN on this day and tows us into the thermally active air. Despite the noticeable tailwind I manage a good take-off and again I have to grin. As an inveterate foot launcher, I'm just getting a taste for winch towing – is that possible? We soon head for the clouds again. Andreas is also able to take advantage of the short weather window before the first rain front approaches. The rest of the team has to wait for the short phase afterwards – before the following rain front comes in.
Eventually, the weather decides that we move on to the cosy part earlier. The evening at the Naturfreundehaus is indeed long and cheerful and talkative. While a lot of Franconian “barley juice” is consumed, I eventually get involved with the “red dominatrix”. And it doesn't stay with just the one... The fourth one almost knocks me out. Fortunately, Thoralf's extra glasses save me and I can still keep my perspective to some extent. 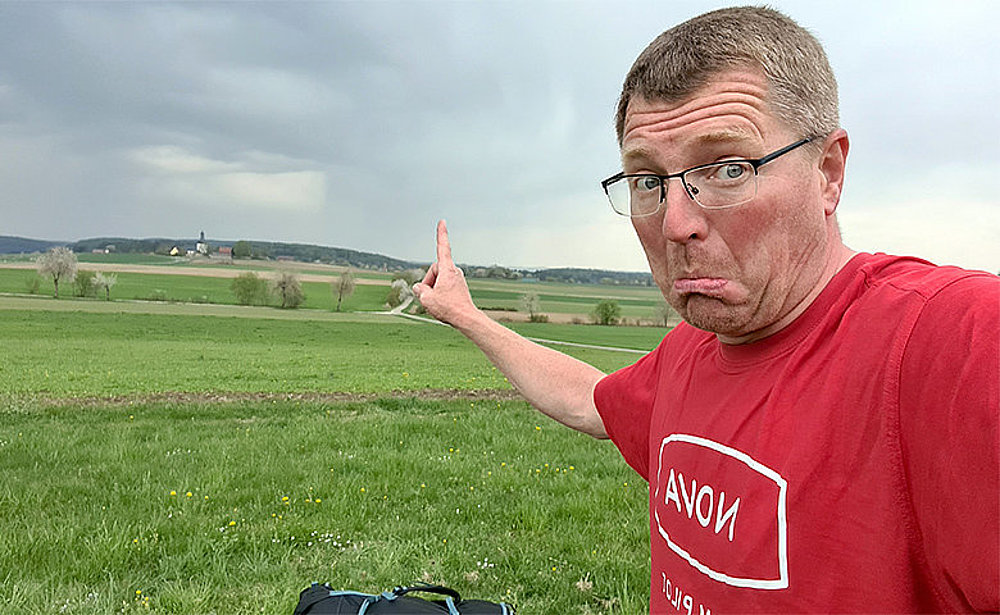 Sunday turns into a rather quiet and leisurely day. The weather forecast promises overdevelopment and rain at noon. We decide not to go to the winch, have a big breakfast instead and then gradually start our journeys home in the four directions. Before that, I take advantage of an extensive hike through the beautiful nature reserve Leidingshofer Tal to sweat out the last remaining dominatrixes. 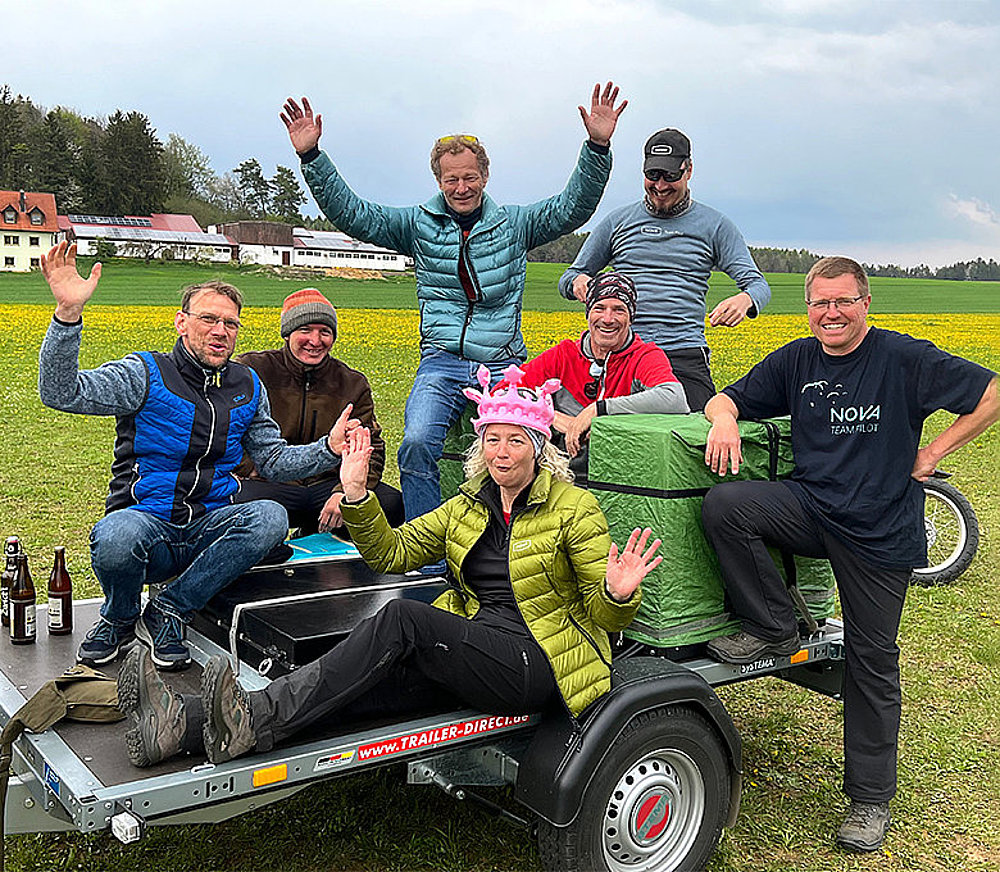 With a big grin on my face and many new impressions, experiences, encounters and conversations in my luggage and the unexpected realisation that winch towing can also be fun, I make my way home on Sunday afternoon. It's nice that it finally worked out with a "real" meeting again. It was nice to have been there. A successful and unforgettable weekend with remarkable people who share a common passion lies behind me and the NOVA Flatland team. As Moni says in typical Bavarian Forest-idiom: "Gscheid schee woars* - a great bunch!" It calls for a repeat!

*It was really nice