On the 24th of March 2022, Swiss pilot Toni Brügger flew a 213.97 km FAI triangle in Ticino aboard a NOVA AONIC, a high-end EN A wing. He launched from Mornera, was in the air for 9 hours 10 minutes and achieved an average speed of 23.68 km/h. This means he not only had the furthest flight on the day from Mornera, but he also flew the fastest mean speed. Considering that the end of March is usually too early in the season for records, his achievement becomes even more significant! Here is an interview about the flight, Toni’s thoughts and the AONIC. 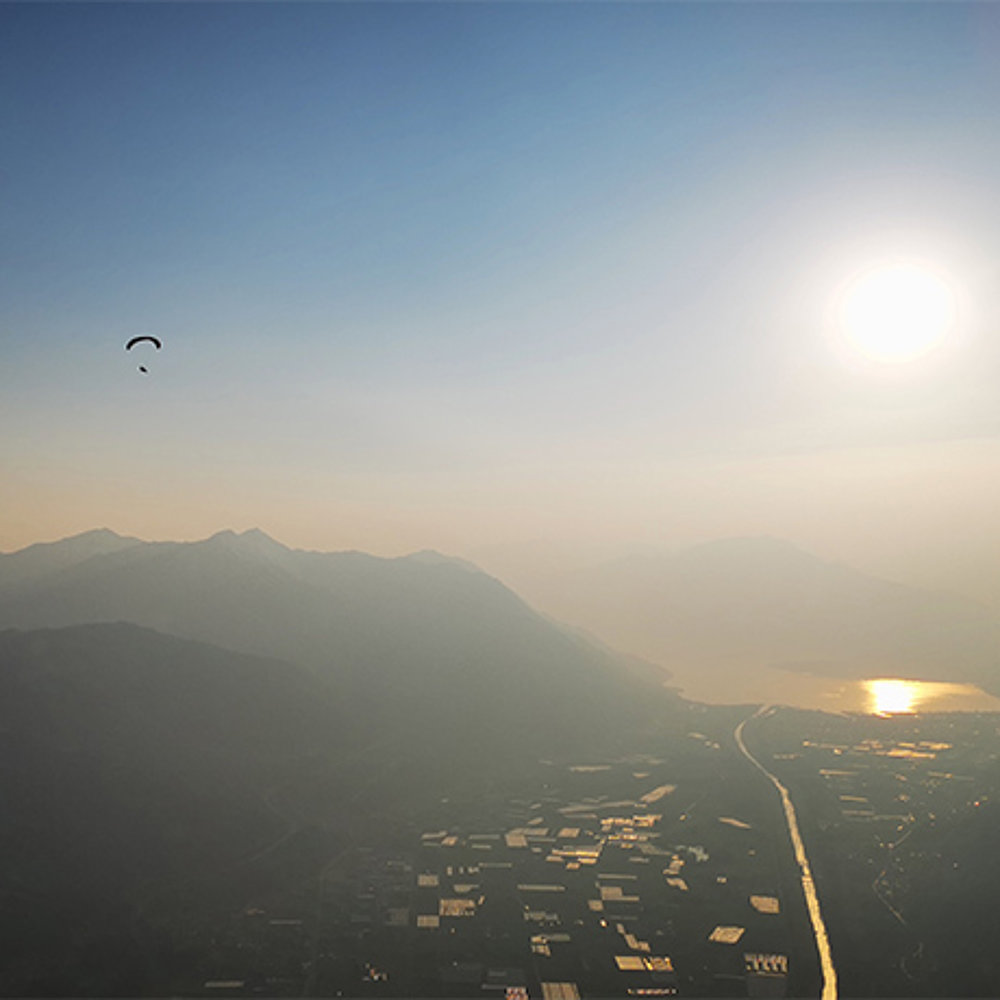 Congratulations on this epic 213.97 km FAI triangle, Toni. You took off from Mornera and flew west to the first turnpoint near Dufourspitze. The northern turnpoint was west of Nufenen Pass, the last and south-eastern TP a few kilometres east of Bellinzona. What made you plan the route like this?
The high cloudbase allowed me to move the second turnpoint from Airolo to near the Nufenen Pass. This meant that four FAI triangles of different sizes were still possible for the third turnpoint.

Were there any challenges during the flight?
The biggest challenge was the strong valley wind in Valle Leventina on the third leg, which was augmented by the southerly wind. 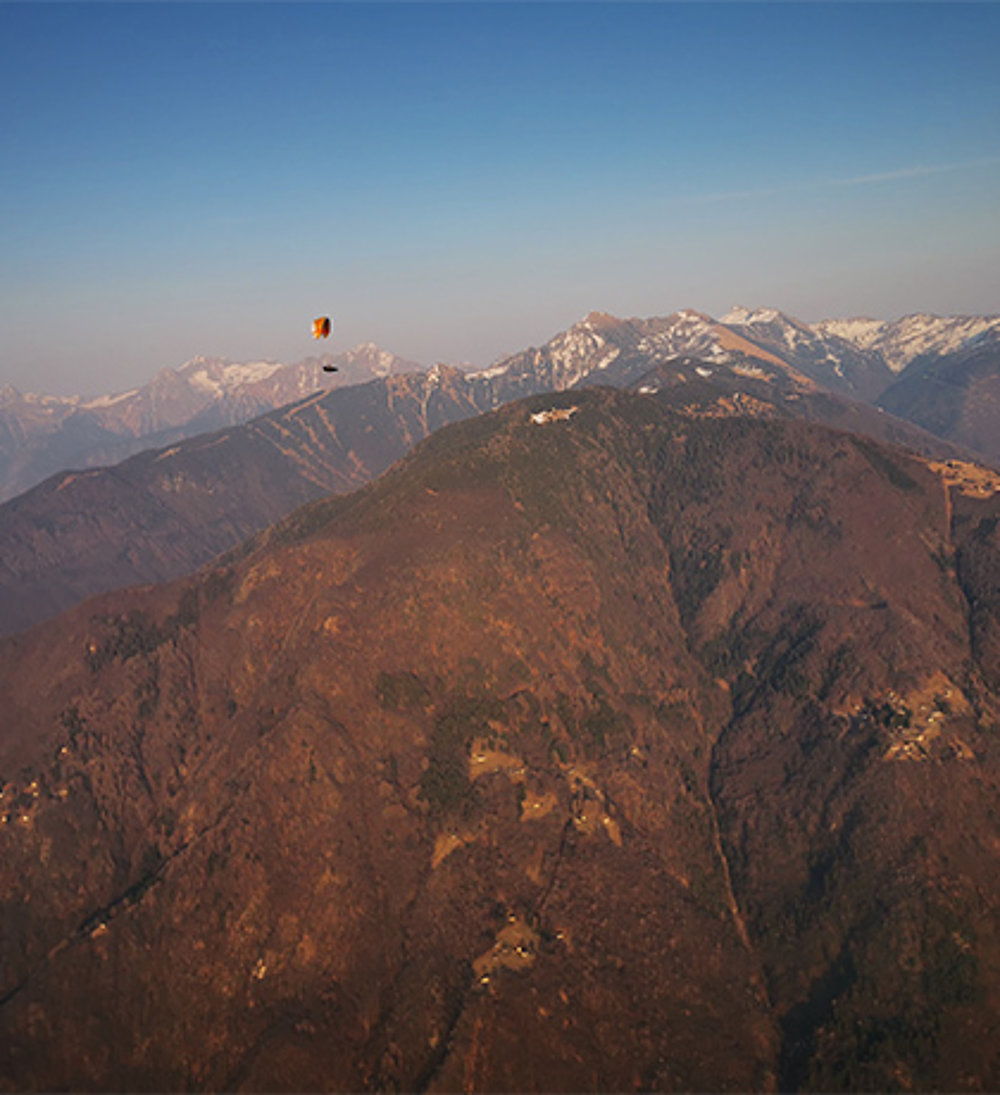 How do you always manage to fly such a high average speed? Before with the PHANTOM, the ION and now even with the AONIC, an EN A wing?
Due to the high collapse resistance and the good-natured collapse behaviour of these gliders, I can actually always fly fully accelerated. And it is clear that one of the main developments in new gliders is the increasingly flat polar curve.

For years you have flown huge distances on EN A or B wings. Is there a reason you choose these wings?
I have really come to appreciate stress-free flying with simple gliders - especially in turbulent conditions, which is what you mostly have on epic days. This gives me more time to make the right decisions and still be fit and relaxed after ten hours. In addition, a large, well loaded low-end EN B, and also the AONIC, flies very well with a top-class harness. I don’t need anything else. 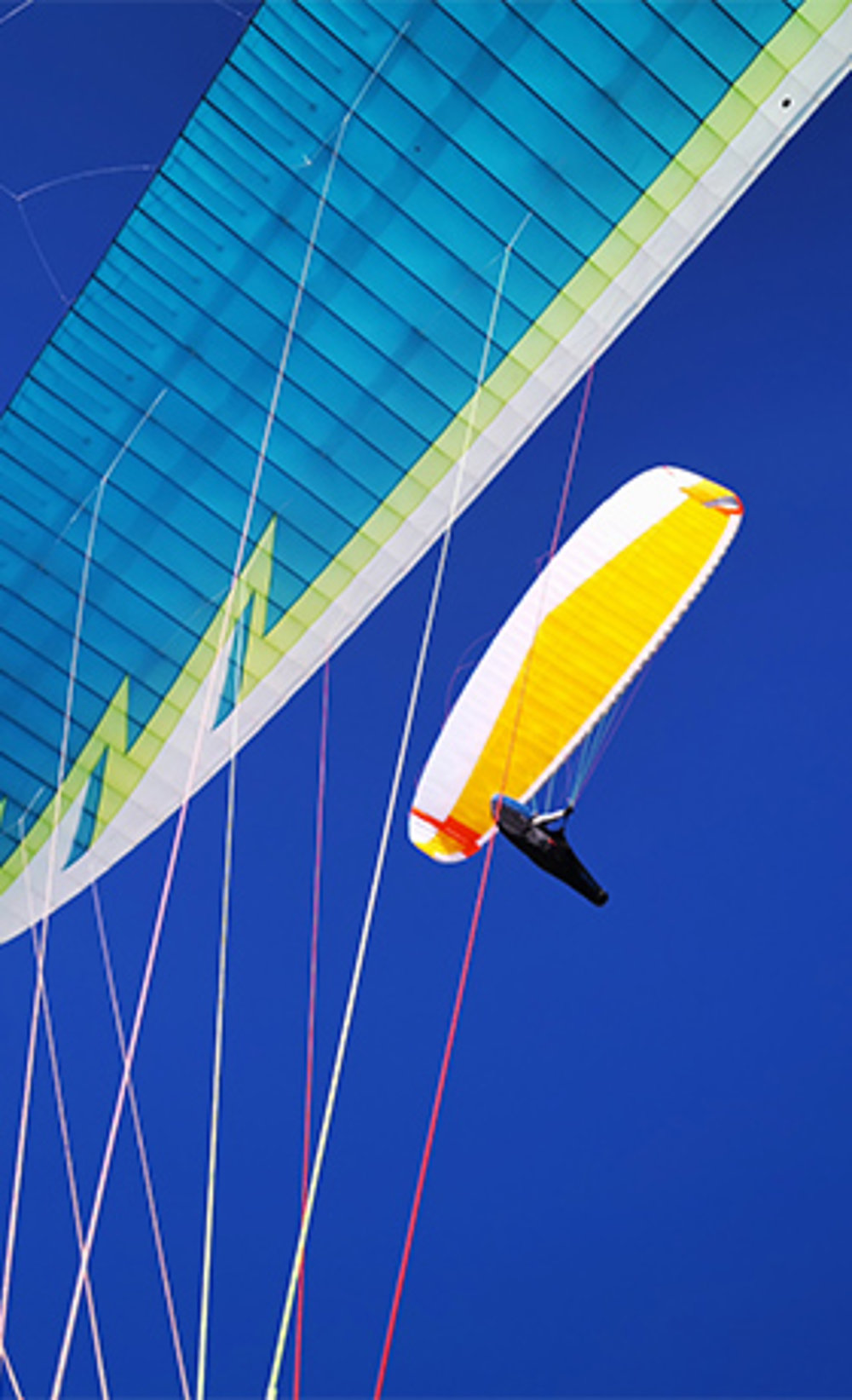 But couldn’t you fly even further with a higher-class wing? Are you not tempted?
I am not sure if that would mean I would really fly further. The performance differences between wing classifications are somewhat small. Only two-liners are significantly faster.

Don't you find it boring to fly with an EN A glider, although you are such a good pilot?
The AONIC is the first EN A wing I have flown, and it is really nice to fly. No, surprisingly it is not boring at all.

What do you think is the potential of the AONIC?
250 km FAI and more.

How do other pilots react when you arrive with a glider used for instruction and then go cross-country? And then completely outfly them?
Hmmm, I don’t really get any reactions. Maybe they think both these things are not cool. I have no idea.

What would you say are the outstanding characteristics of the AONIC?
The AONIC is very stable, with intuitive handling and it climbs really well. Especially in strong and turbulent conditions, it is a safe and effective cross-country glider that even a more experienced pilot will enjoy. 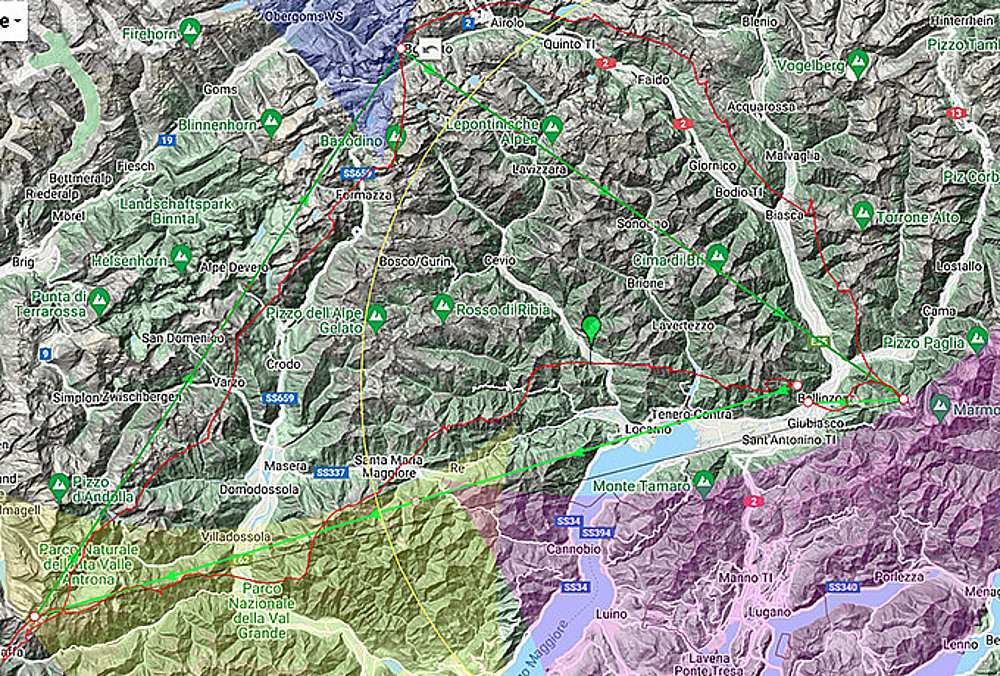 Please tell us something about the route and the weather.
The thermal forecast predicted a good cross-country day with a very high cloudbase of 4000 metres and light to moderate southerly winds. The place to be was Ticino – so off to Mornera, the launch site above Bellinzona!
After an early launch straight into a thermal, I head quickly towards Cimetta. Cloudbase is already 3000 metres. I ignore Monte Salmone and fly directly to the Onsernone Valley. I carefully fly around the Locarno CTA and head in the direction of Centovalli. The timing is perfect. But then… yikes! The right-hand speed-system cord tears out of the pulley and disappears in the pod. Without the speed-bar in the Centovalli? I feel like a leaf in the wind. It’s not funny. Should I continue with the flight? 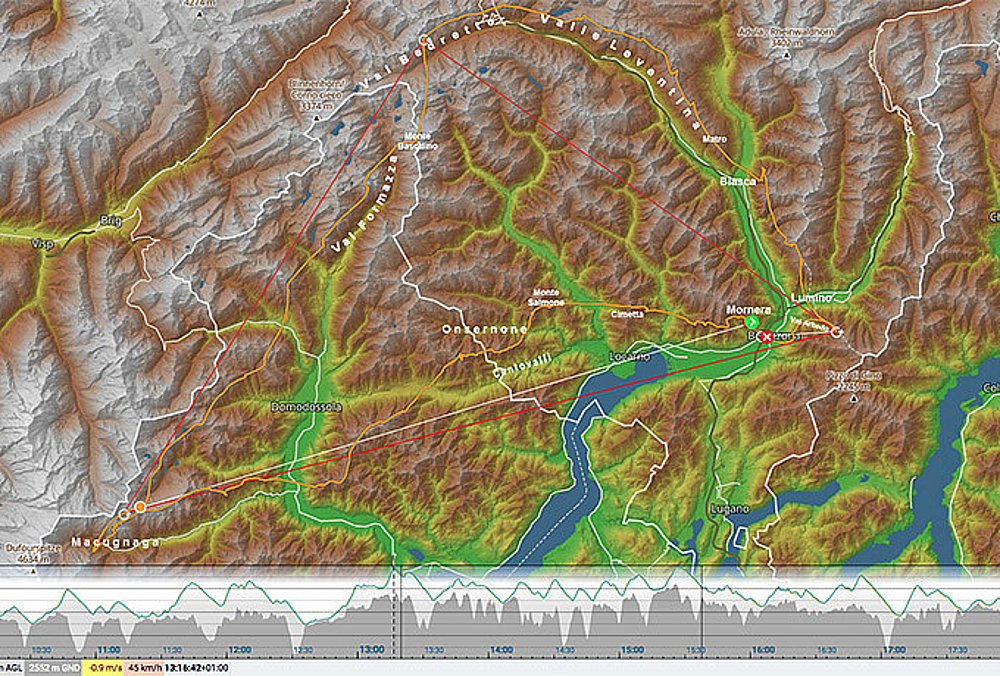 The transition to the Val Grande National Park gives me time for some DIY… but the attempt to get the cord back through the pulley fails several times. A small carabiner has to do the job instead. Pushing the bar is heavy now, but at least it works.
Before the important crossing into the Macugnaga Valley, the question arises whether to approach directly or along the ridge as close as possible to the valley entrance? I choose the safer route, but the detour doesn’t pay. I am only at ridge height. Déjà-vu. As expected, there is a lot of wind in Macugnaga. A bit of time passes and then I get really good lift. I am flying a little behind with my schedule, so I adapt the plan. 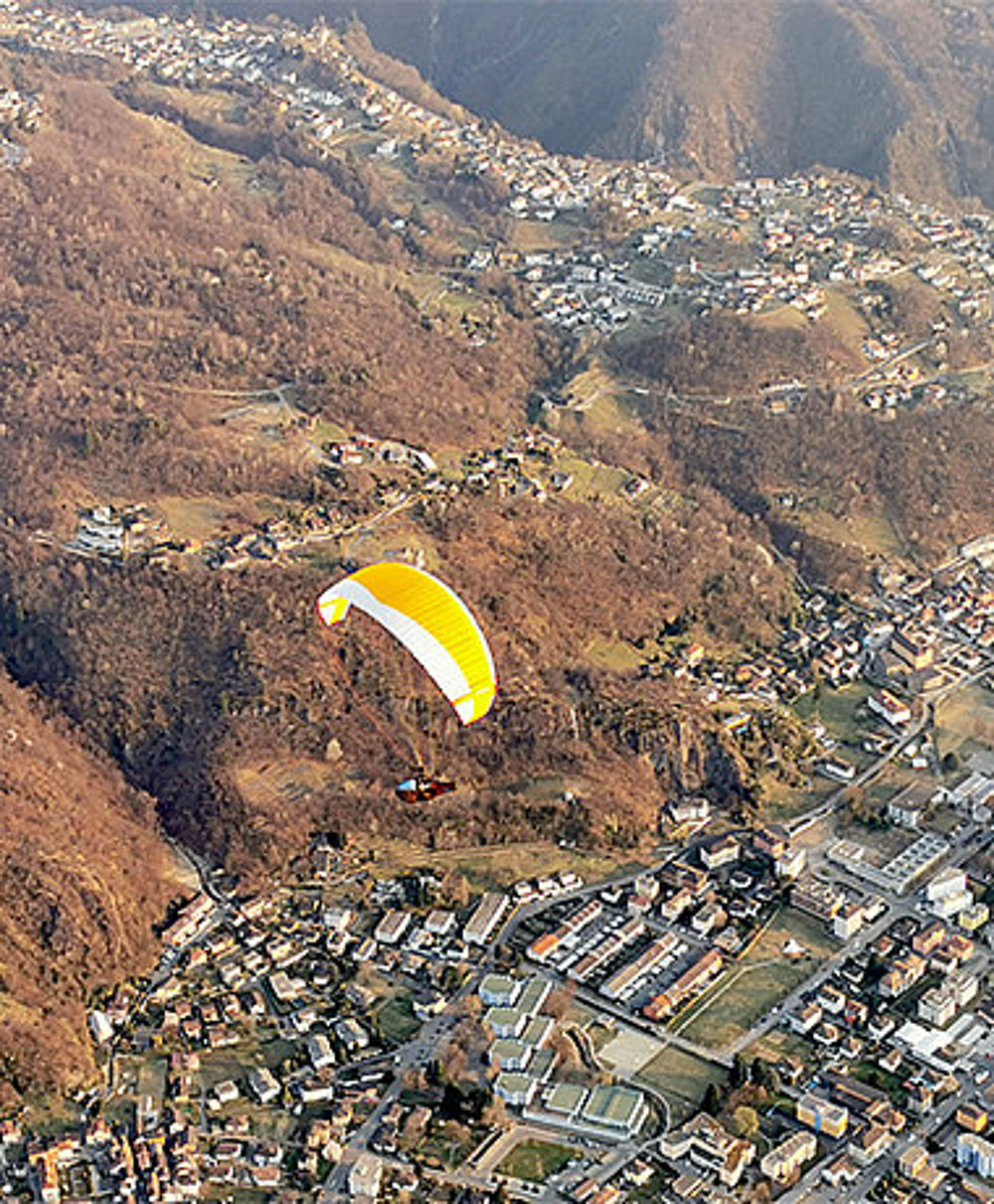 There is too much wind near the Monte Rosa massif. I barely make forward progress. The new schedule is pressing. I push forward and decide to set the first turnpoint. A little short, I can forget the really big triangle.
I head northwest towards the second turnpoint. With a strong tailwind I enter the Formazza Valley. It is a joy to munch miles at this speed! Flying ahead of me are Martin Moser and Bruno Bohren. I try to reach them, but I don’t quite get there. At the Basodino I climb to 3800 meters, just brilliant! I glide into the Bedretto Valley, set my second turnpoint, and go on to Airolo.
With an increasing headwind, I continue along the south-western flanks of the Valle Leventina to Matro. The transition east at Biasca could prove difficult. I take another strong climb and then start the crossing. The height was needed. I start to feel confident.
But on the opposite side, I suddenly find myself in the full force of the valley wind. Progress is difficult, so I turn back and soar up the next ridge until I reach the saving thermal. That was close. Onward, onwards, but it is getting late. I take every little thermal and creep southwards. Every time it's close, but it's always enough. 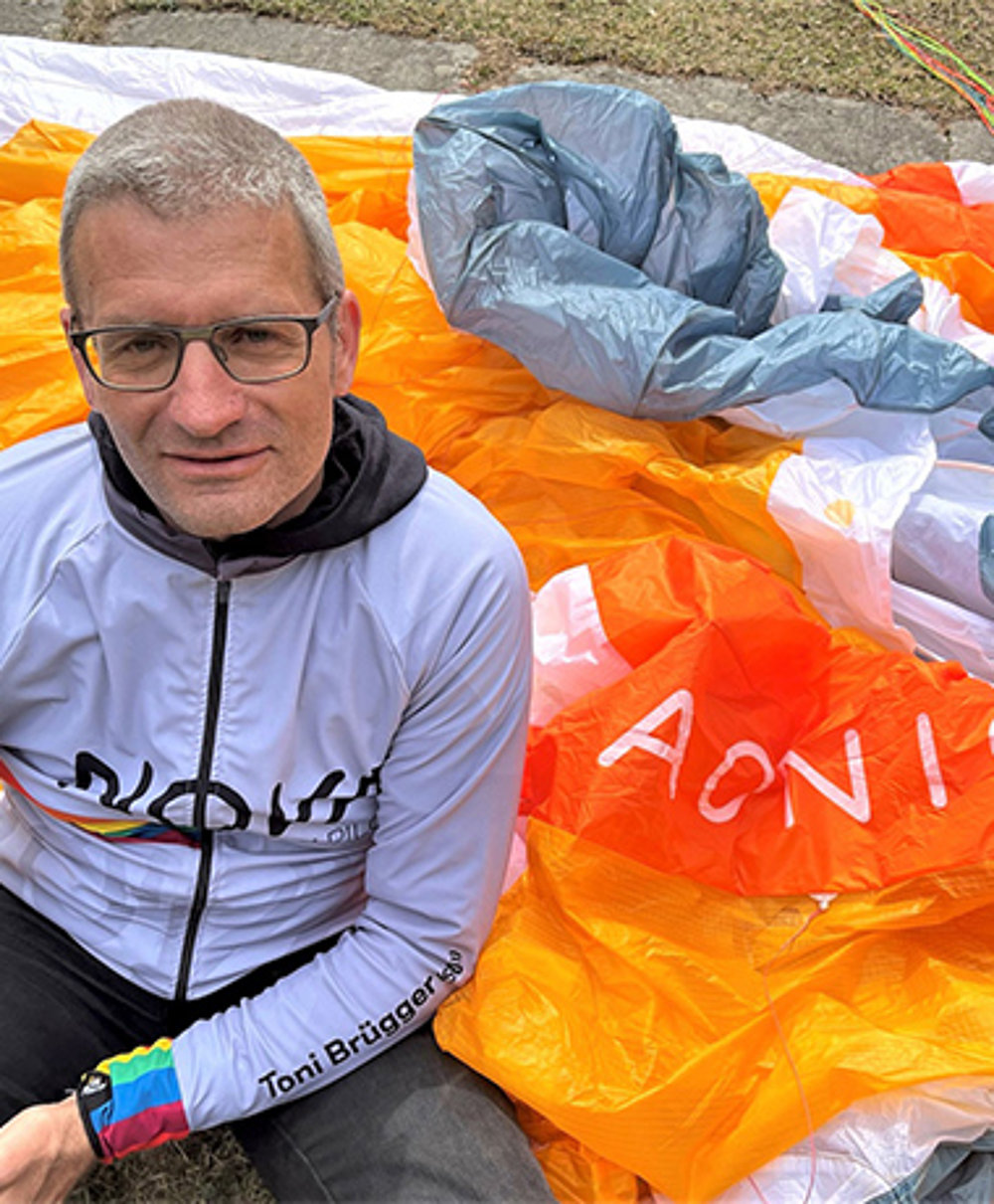 At Lumino I need to transition into the Arbedo Valley. It is now very late, there is hardly any sun. I am too slow to set the third turnpoint further east in Italy. I use the remaining valley winds to soar, but there are no more thermals. I crawl back to Bellinzona. Luckily the valley wind is now less. The sun has set. I glide down. I land.

On that day lots of things worked well. An amazing flying day.

That’s really true. Thank you, Toni, we wish you continued success and fun.

Andrew Graham has put Toni’s track plus several of his air buddies on Ayvri – really interesting to watch. Admire Toni’s piloting skills and see how well the AONIC performs. More on this “world record-breaking” wing at www.nova.eu/aonic

By the way, with this flight Toni Brügger succeeds Robert Schaller, also a NOVA Team pilot. Robert was the first pilot to fly a +200 km FAI triangle with an EN A wing. On the 11th August 2015, he flew 209.2 km from the Grente with his PRION 3.