As in the previous year, the NOVA Climb & Fly Team did not miss the opportunity to hold a joint team meeting. Despite the pandemic, it was possible to spend a wonderful weekend at the Volkzeiner mountain hut in East Tyrol in a responsible manner and with a lot of distance from civilisation (in the truest sense of the word). The CFT local legends Manuel Ploner and Simon Heinrich invited us to their home area. Paul Nagl reports: 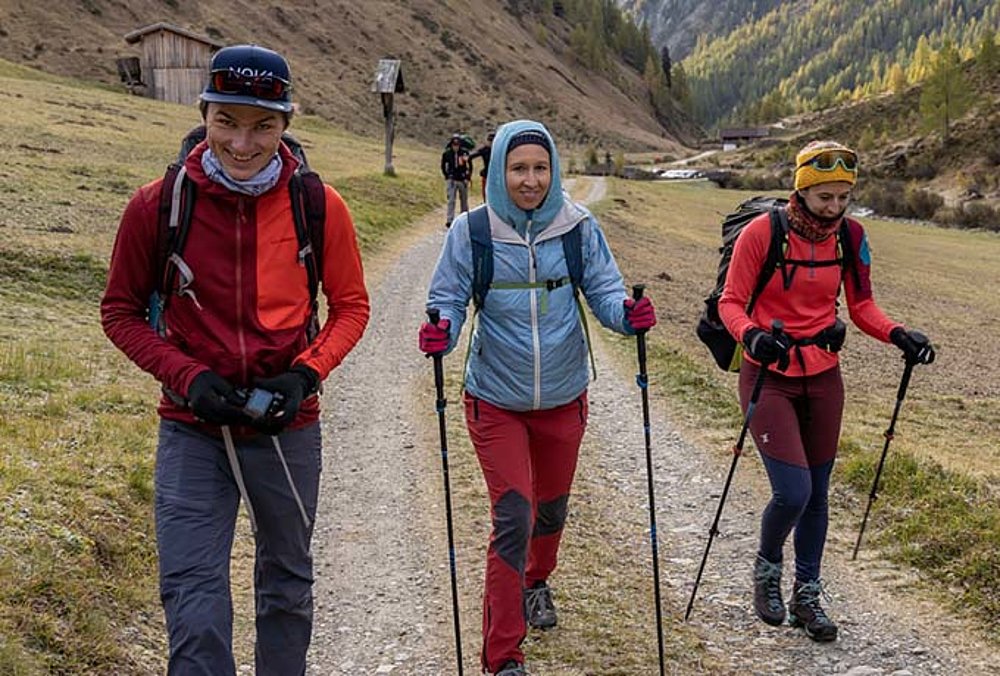 The Volkzeiner hut is nestled between picturesque alpine meadows at 1886 m and surrounded by the beautiful Villgraten mountains. There is no mobile phone reception and electricity was only available intermittently thanks to an ancient diesel generator. Despite everything, we felt like we were in a 5-star hotel. At the meeting a year ago, we had a hard carry all our provisions and heaps of equipment up to the hut. 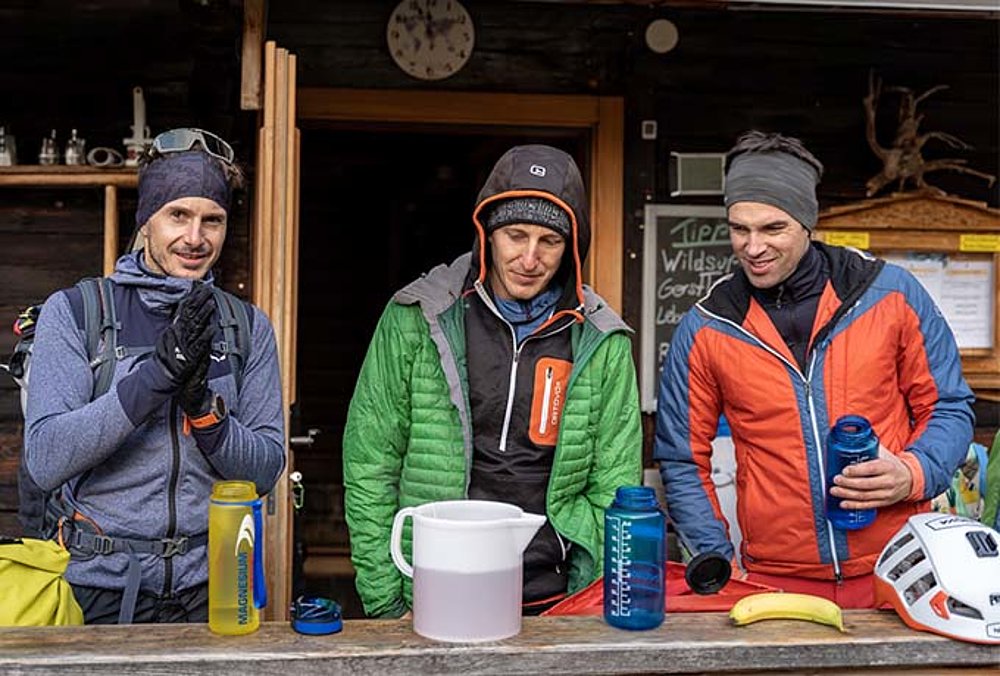 This year we were royally spoiled by the host Toni with venison stew and ribs. Toni also didn't miss a chance to invite us a round of schnapps, which tested us sports-mad and not exactly hard-drinking para-mountaineers. For the sake of fairness, however, it must be added that all the East Tyrolean team members, in contrast to the rest of the team, put away each new round of fruit schnapps very well. The locals know the customs and traditions. 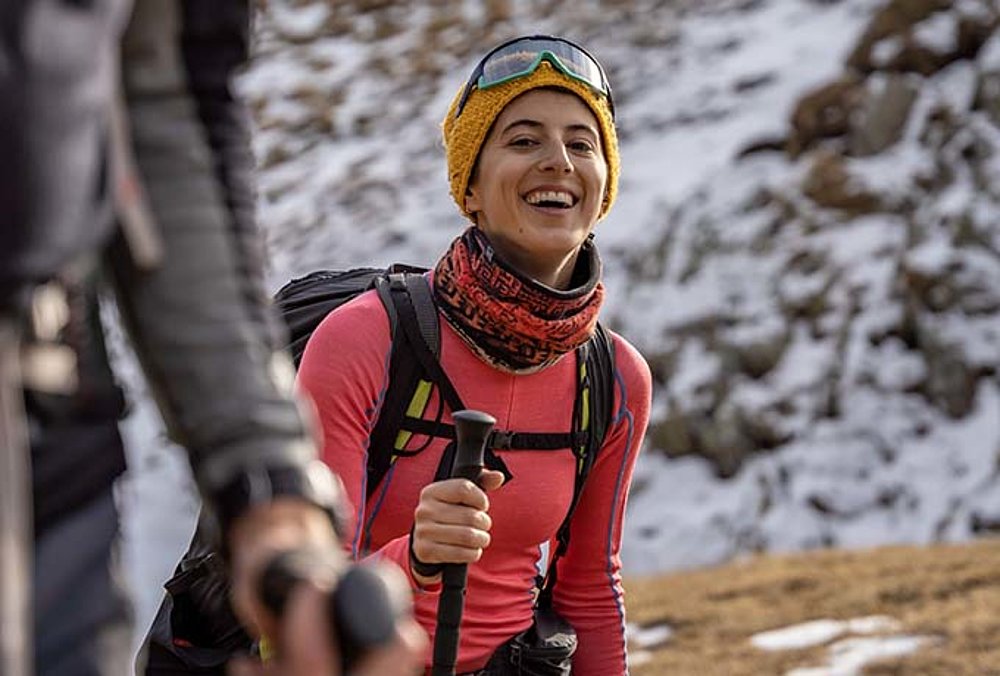 The joy of the team members to see each other again after a long break and to be able to go into the mountains together was enormous. Accordingly motivated, we set off the next morning in perfect weather for the Big Degenhorn. The focus of this year's meeting was not so much on achieving great para-mountaineering feats, but on seeing friends again after a long time and exchanging stories. 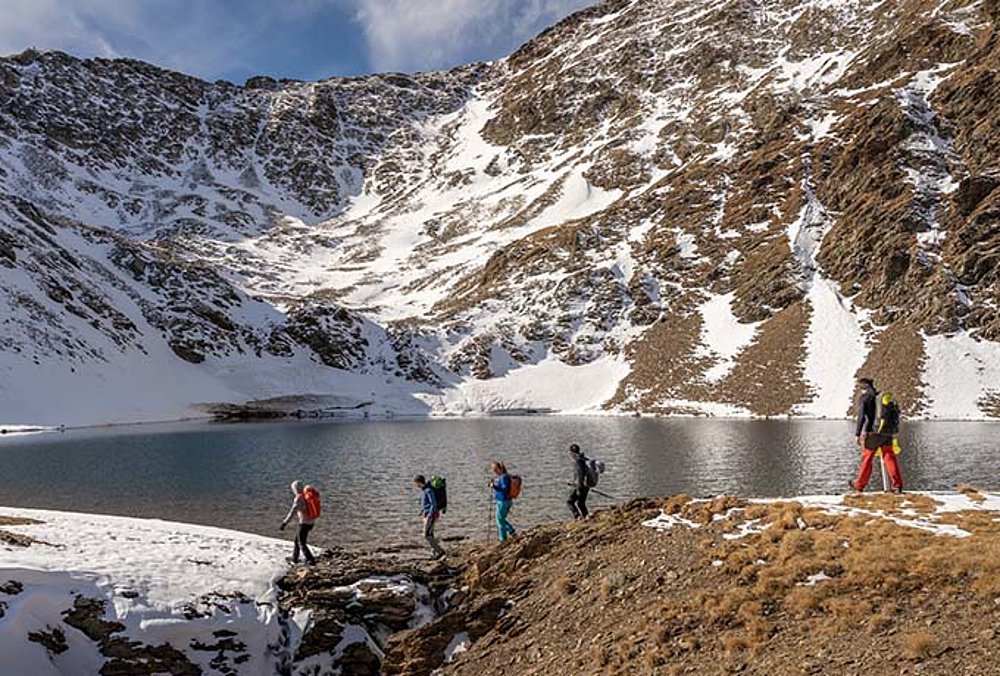 Thanks to the convenient location of the hut, after a rich breakfast with bacon, polenta and egg we were able to start directly from the Volkzeiner hut. We first went up towards the end of the valley through larch forests, which showed themselves in their most beautiful golden-yellow hues. Then we trudged through the first snow of the year, past mountain lakes that were often already completely frozen. 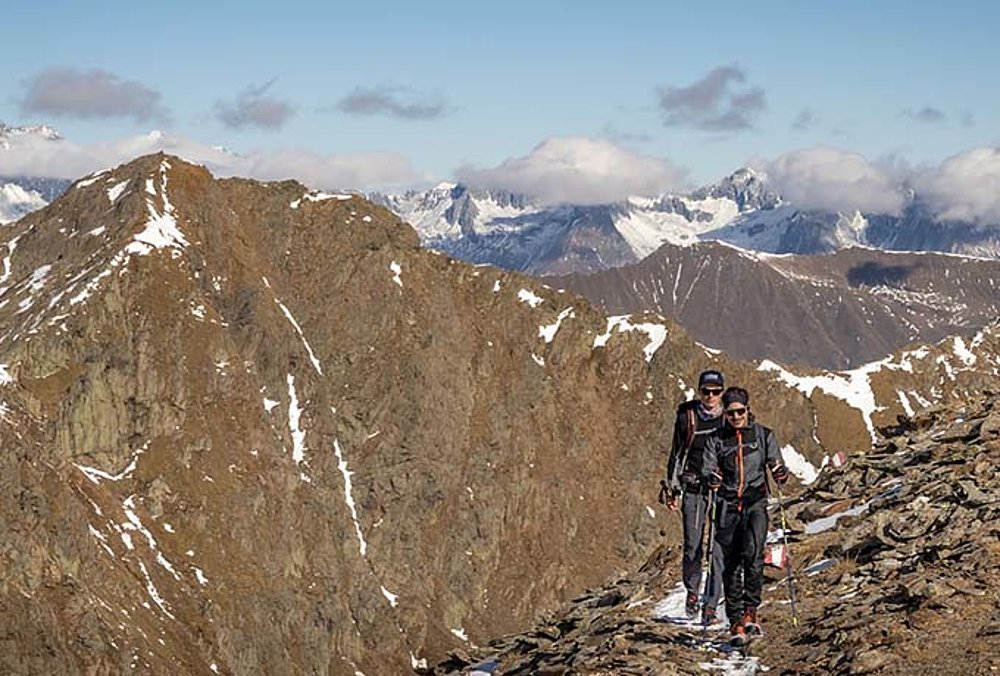 Last but not least, we went over a rocky ridge, from the east, towards the summit of the Big Degenhorn. At the top we were rewarded with a spectacular view towards the Großglockner, the Großvenediger and the Dolomites. 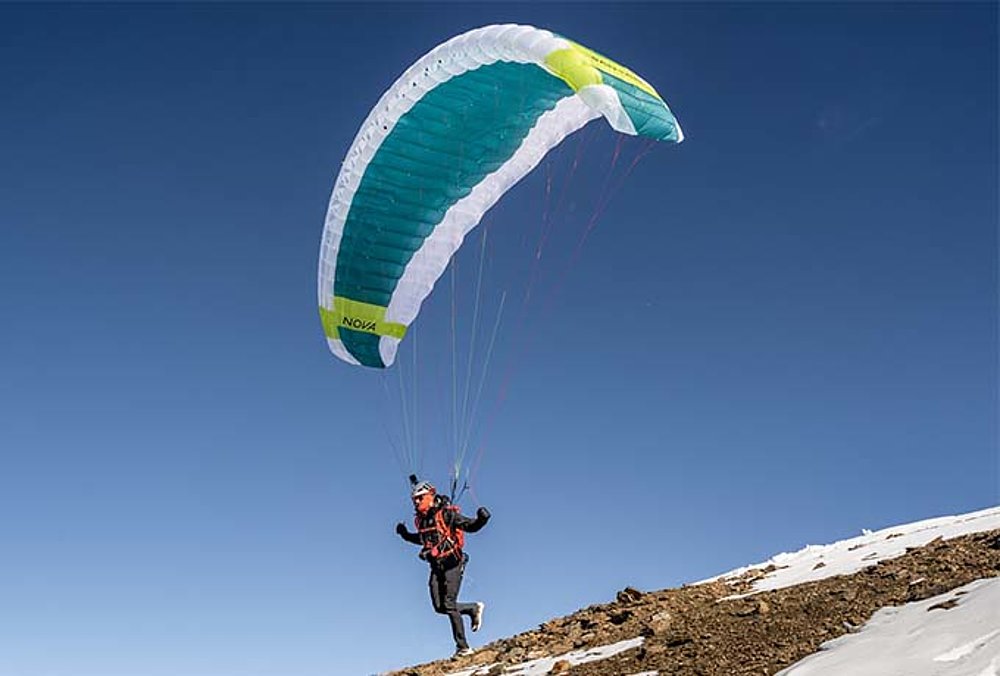 The summit did not offer much space, but still enough to launch westwards with our BANTAMs and DOUBLESKINs. Thanks to the good take-off characteristics of the two gliders, we were in the air after only a few steps. Thus, we were spared a "classic cliff launch", as the take-off site turns into a steep face after about 20 m. 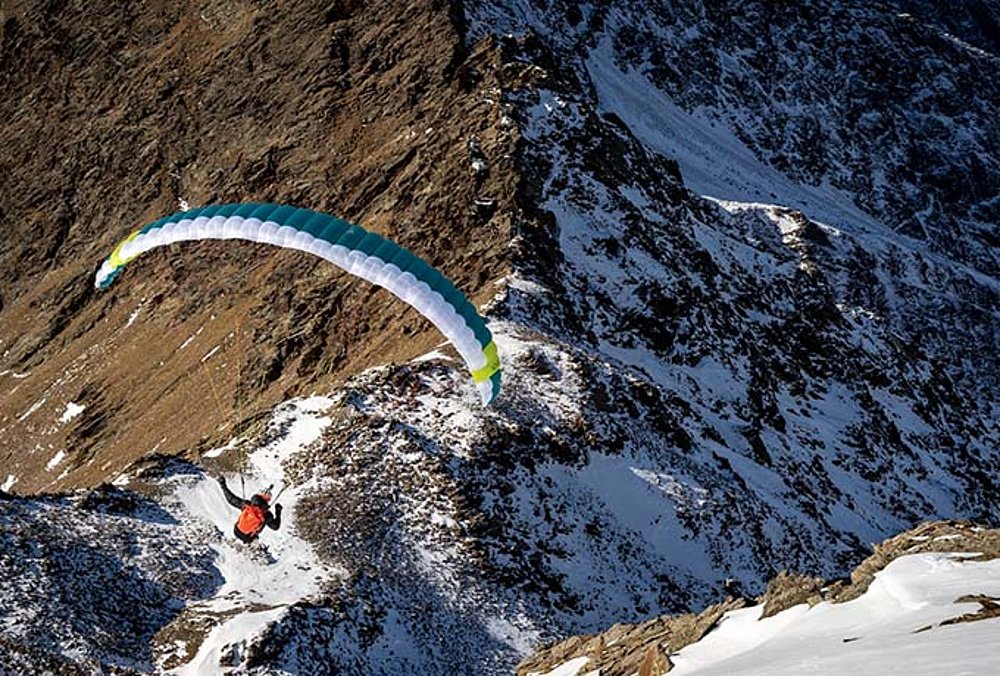 From the air we were also able to enjoy the Villgraten mountains to the fullest, thanks to fantastic flying conditions. The open, grassy and slightly undulating terrain of the surrounding mountains offers endless possibilities for the ambitious paraglider pilot. It was a pleasure to watch the NOVA Climb & Fly Team glide downhill together, never missing an opportunity to make another top landing at a suitable spot, just to enjoy the beautiful surroundings for a moment and then continue flying. 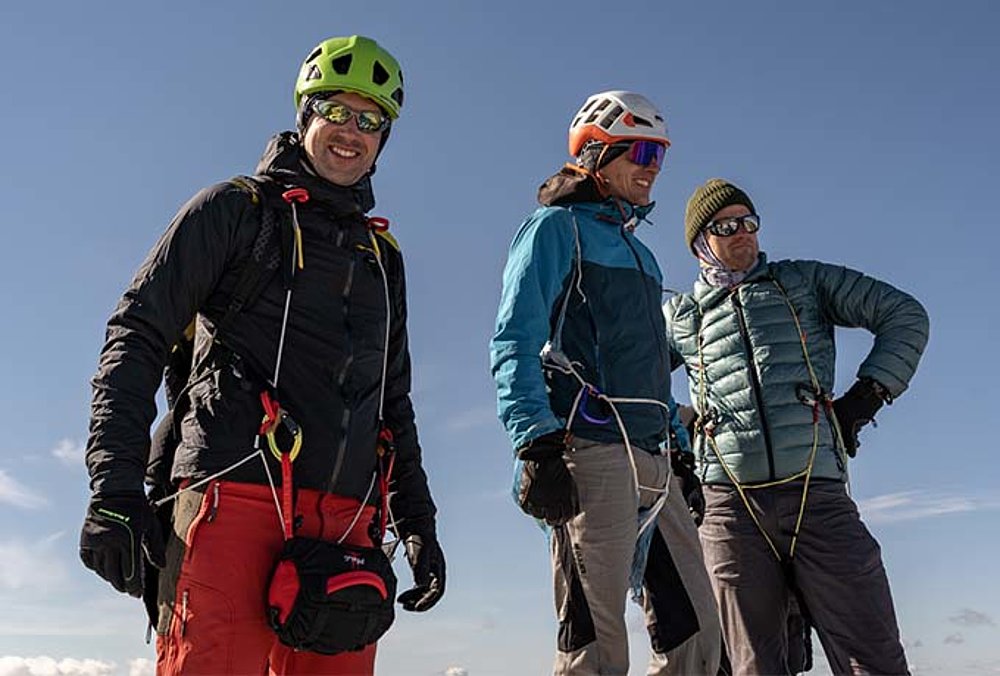 Once down, it was quickly clear that the day was far from over and that the good weather would have to be used to explore the surroundings further. So the backpacks were packed again without further ado and off we went for the second round. The desire to explore the autumnal mountain landscape with our BANTAMs and DOUBLESKINs was simply irresistible. 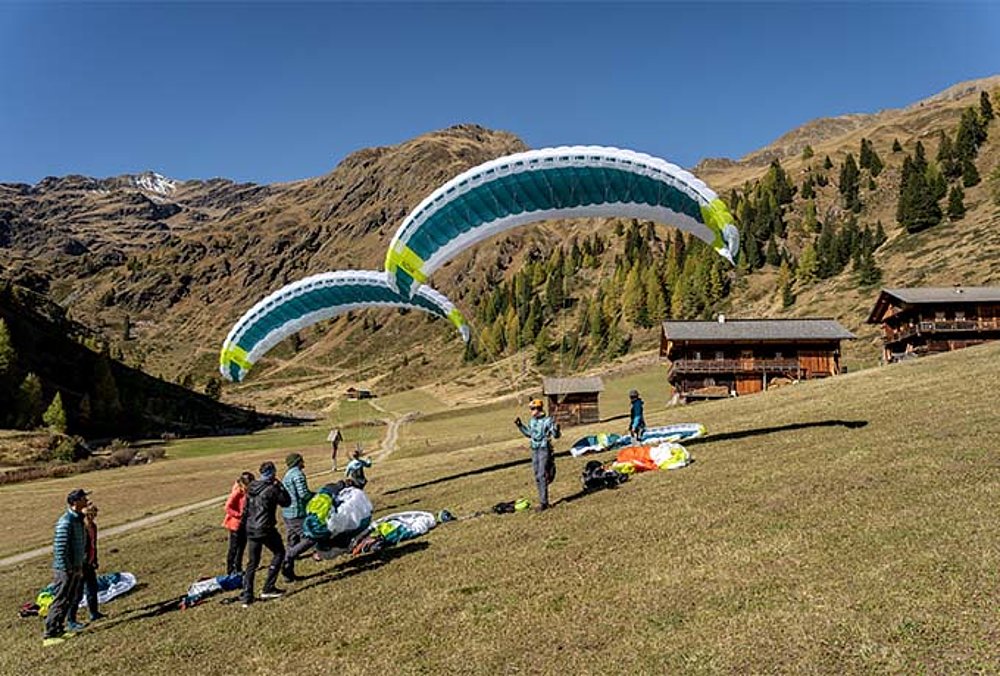 Exhausted, satisfied and with a few metres of altitude in their legs, the CFT came together at dusk in Toni's parlour to enjoy a sumptuous dinner consisting of ribs, gratin and coleslaw. What could be better than rounding off a great day in the mountains with friends? The rest of the evening was spent talking, making plans for future tours, exchanging knowledge about previous tours and, above all, laughing a lot. 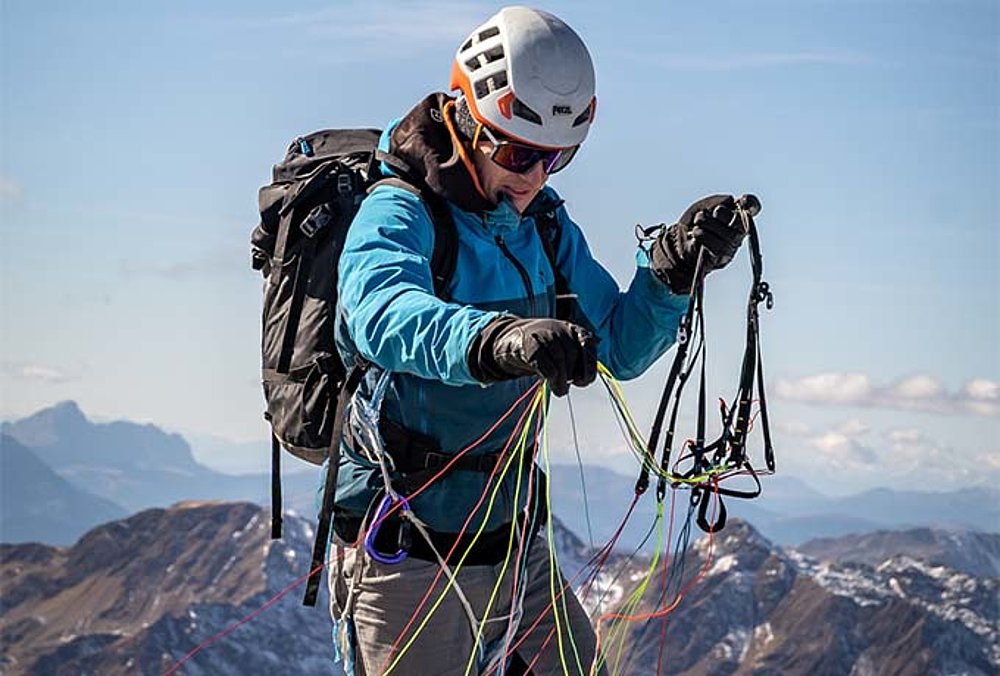 The following day was very much in the spirit of the previous day - a delicious breakfast followed by joint tours of the surrounding mountains in a beautiful autumnal atmosphere. It was hard to say goodbye at the end of the day. But it was made easier because it was clear that we would see each other again soon to experience para-mountaineering projects together. Although the NOVA Climb & Fly Team has only been in existence for a year, it already feels as if we have known each other for years. The team is characterised by friendly dispositions, helpfulness and motivation - exactly the qualities you want in your touring partners. So it's no wonder that a group of people who were initially only connected by their passion for para-mountaineering quickly became one. 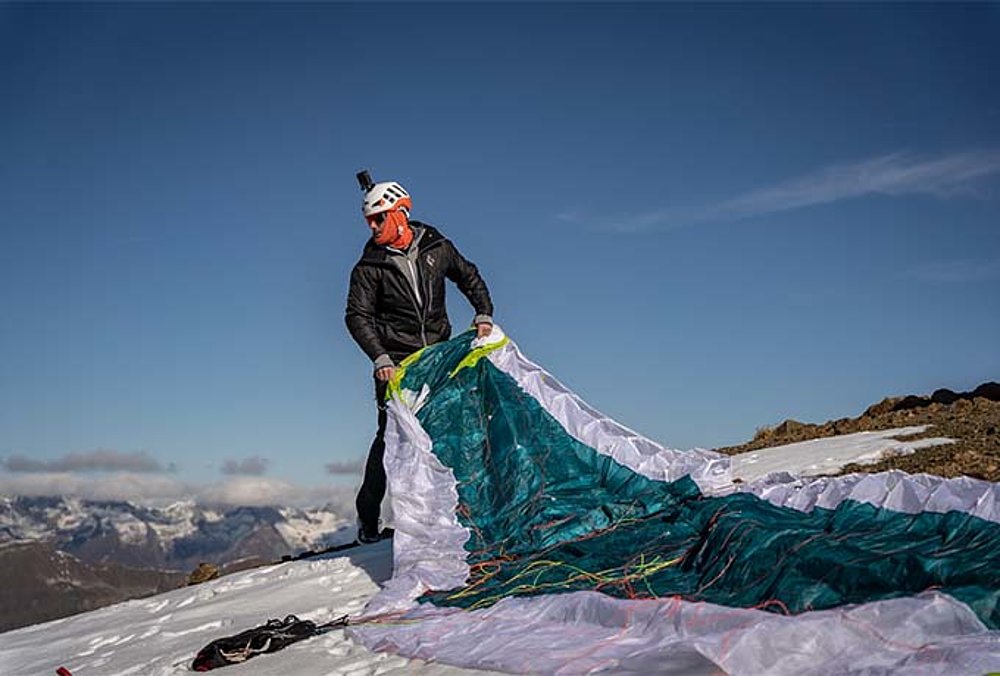 The NOVA Climb & Fly Team was officially founded in 2020 as a sub-team of the NOVA Pilots Team. Since then, the alpinists have been undertaking various hike and climb and fly tours in the Alps around the NOVA headquarters in Terfens (near Innsbruck, Tyrol).

Here you can read about what the CFT has been up to in the last year: NOVA Climb & Fly Team celebrates its first anniversary. 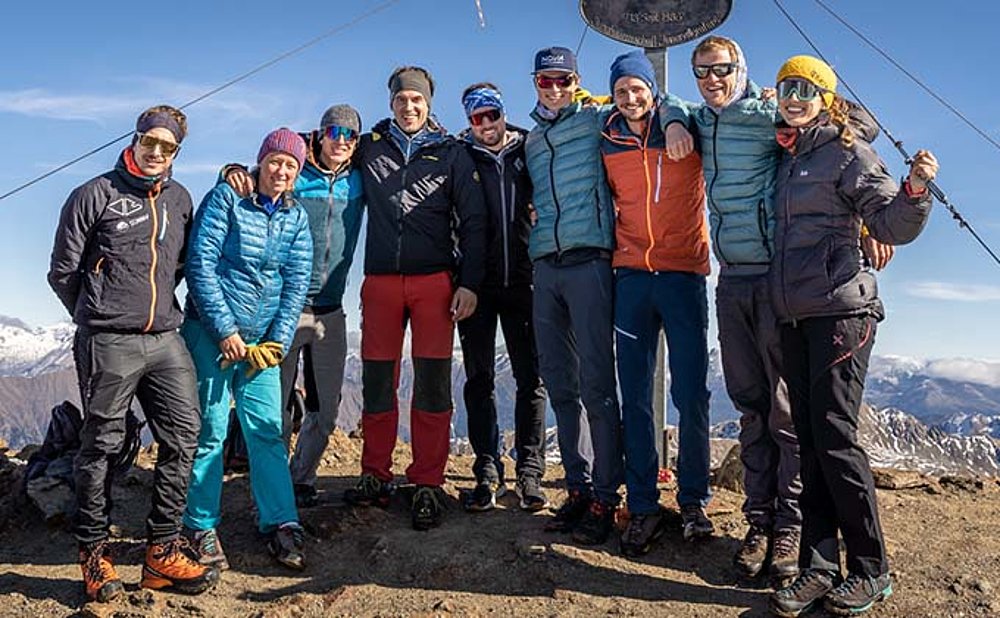 Text: Paul Nagl / Questions to paul@nova.eu / Special thanks to Fabio Keck for the great photos.