SIV with the DOUBLESKIN

“For some reason I was really scared. I was on launch and in a few minutes I was supposed to do a full stall - my first” Hartmut wrote to us. And if we are honest about it, who didn’t feel like that before their first time doing this maneuver. So it is even nicer to read how Hartmut turned fear into triumph. 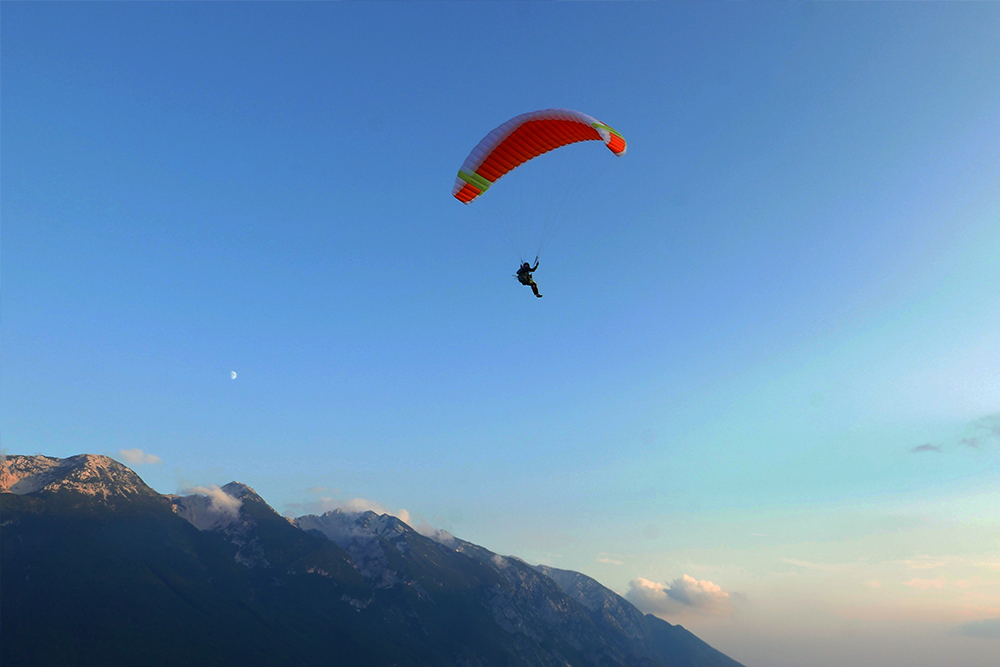 Hartmut reports: “The SIV course was run by flying school Flugschule Salzburg which met with the colourful group of participants at Lake Garda. Most pilots knew each other from somewhere, many probably from training, which for some was surprisingly recent. I didn’t know anyone. Niko, the instructor, radiated calm, which was a big plus for the upcoming maneuvers. The original plan was to spend the first afternoon exclusively on theory. However, the weather forecast did not look good for the duration of the course, so after a short theoretical introduction we made the most of a sunny window and set off for the gondola on Monte Baldo - with face masks, of course. 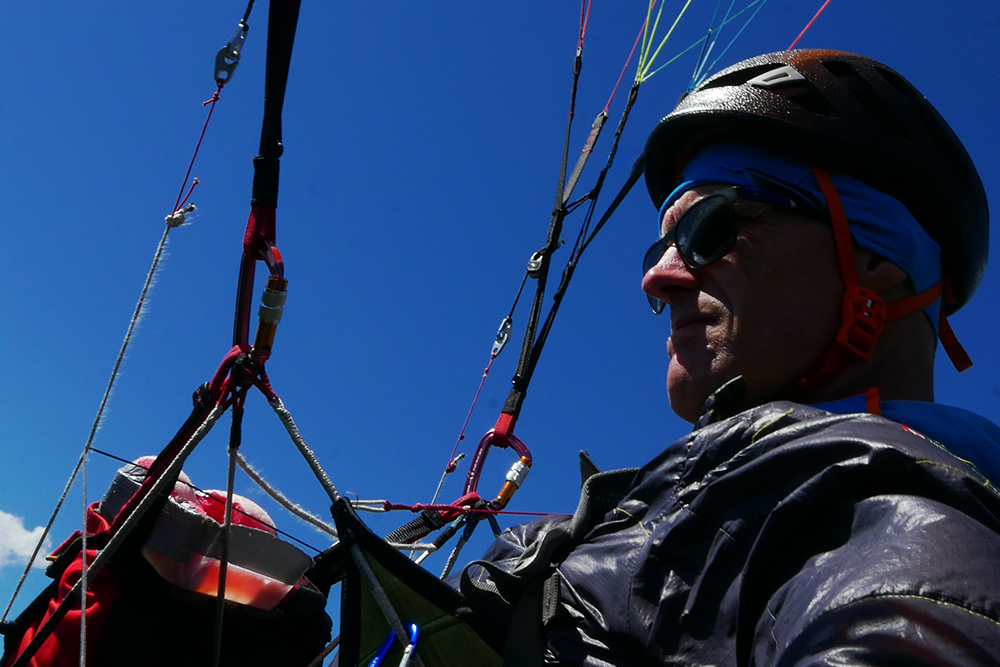 Most of the pilots carried proper packs, some nearly as tall as the pilots themselves. In comparison, my bag was pretty compact: my entire equipment weighs less than 4 kg and comfortably fits into a 30 l rucksack. My pride and joy is the DOUBLESKIN in size 20. Laid out the wing is only 23 m² and weighs just 2.4 kg. Fun fact: as hikers and paragliders not only pay different rates for the gondola and also have different queues, I often had to prove that I really had an aircraft with me. 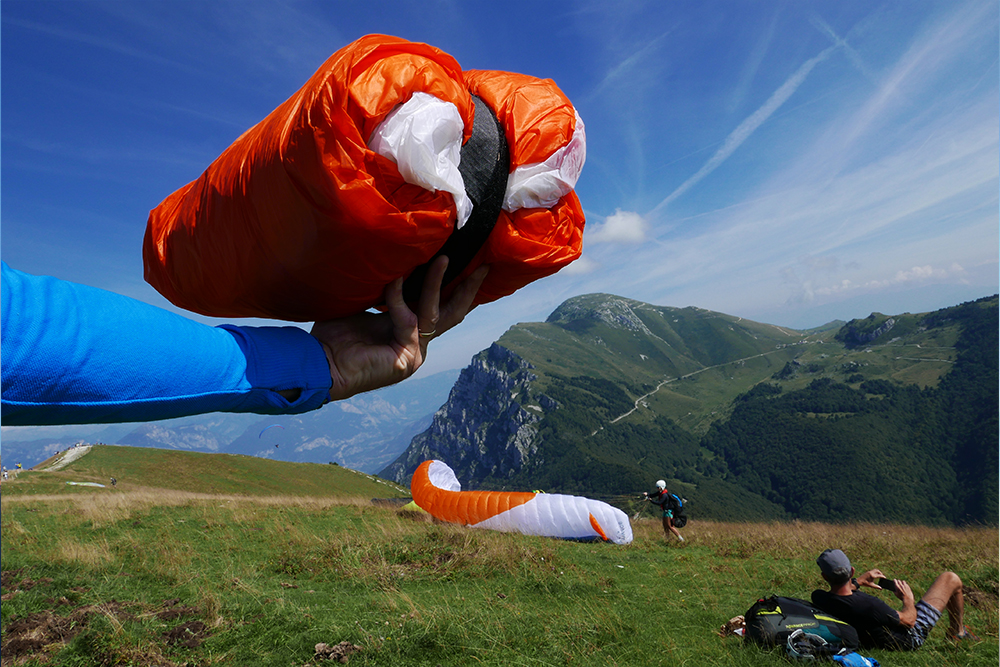 When it comes to flying, I prefer to go on foot and I love to combine paradliding with mountaineering. The initial excursions with my DOUBLESKIN were a fantastic experience! During the ascent the low weight and especially the reduced packing size suited me very well. During hike & fly, the take-off sites can be small and exciting - and therefore the lower aspect ratio and shorter lines are an asset. And combined with lightweight cloth, which just inflates more easily, the launches are mostly simple affairs. I have also already learnt that the DOUBLESKIN is not a pure descent aid. But after 45 minutes in the thermal, the backpack with the climbing equipment simply became too heavy for me, so I went to land. 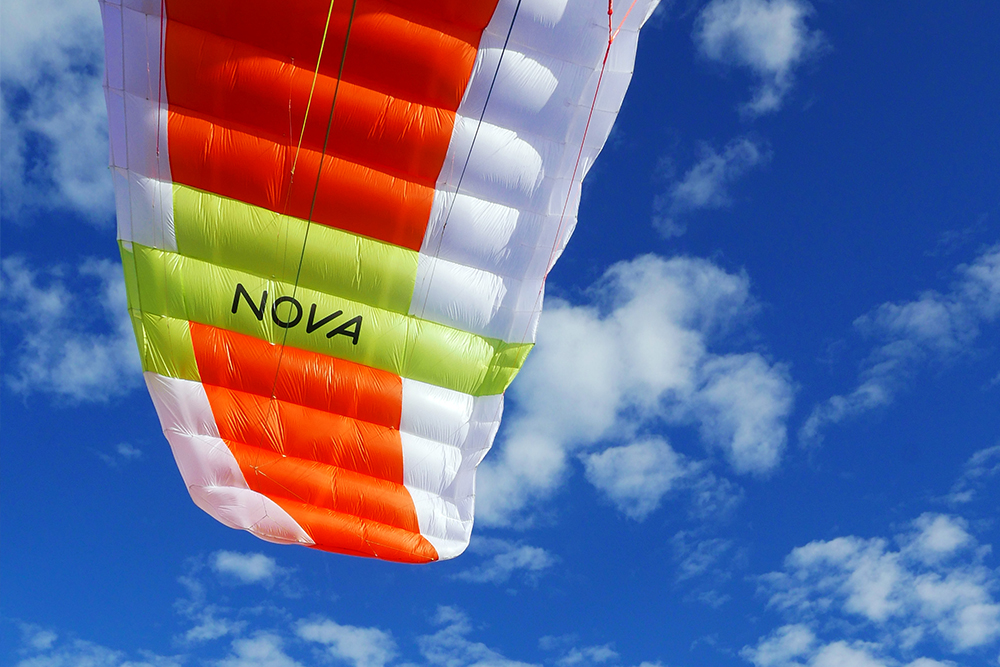 But one question remained: how safe is the lightweight cloth when it comes to the crunch? I wasn’t sure how to assess this correctly. However, that was exactly what I wanted to find out during the SIV course. 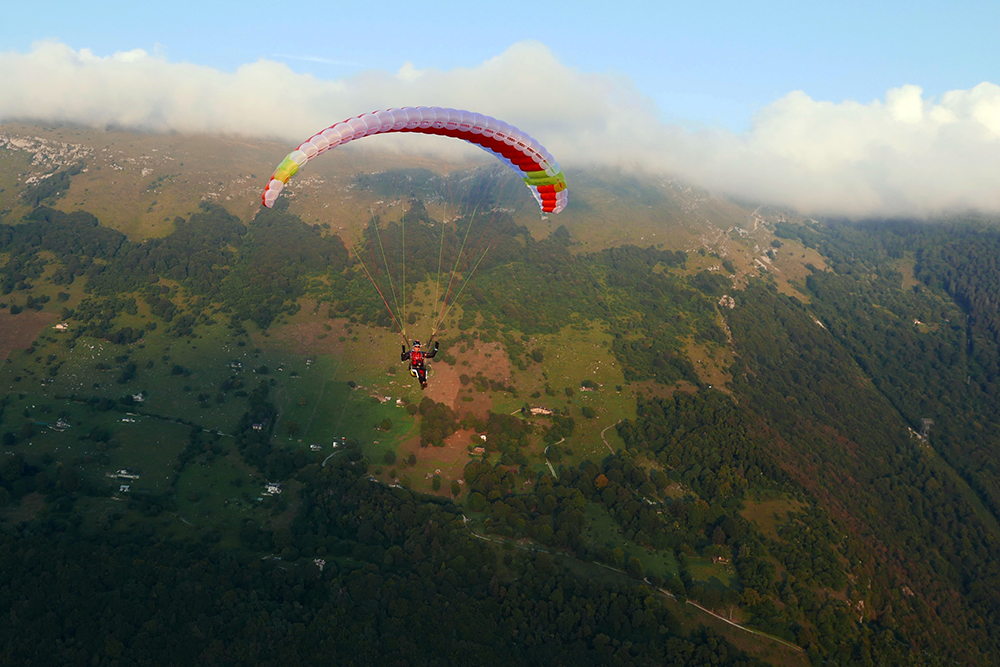 Our instructors Niko and Flo were challenged right from the start. After all, they had to send off a total of 13 motivated pilots in constantly changing conditions. The tension was evident in every pilot. Everyone had ideas as to what they wanted to achieve. For me it was clear what I did NOT want to do… a full stall. So the first flight I concentrated on big ears and a B-line stall. Everything was very uneventful. After the first collapse I thought ‘Is that it?’. On the radio, Niko seemed to have a similar idea and said: ‘OK, now a fully accelerated collapse’. Maybe even he was surprised that I wasn’t thrown around more. The accelerated collapse was a little bigger. But it was neither spectacular nor scary. Next… frontal collapse. The wing immediately opened again. During an accelerated frontal collapse I was shaken for the first time. But with the reassuring voice of my instructor in my ear, everything was no problem and in no time the thing repaired itself. 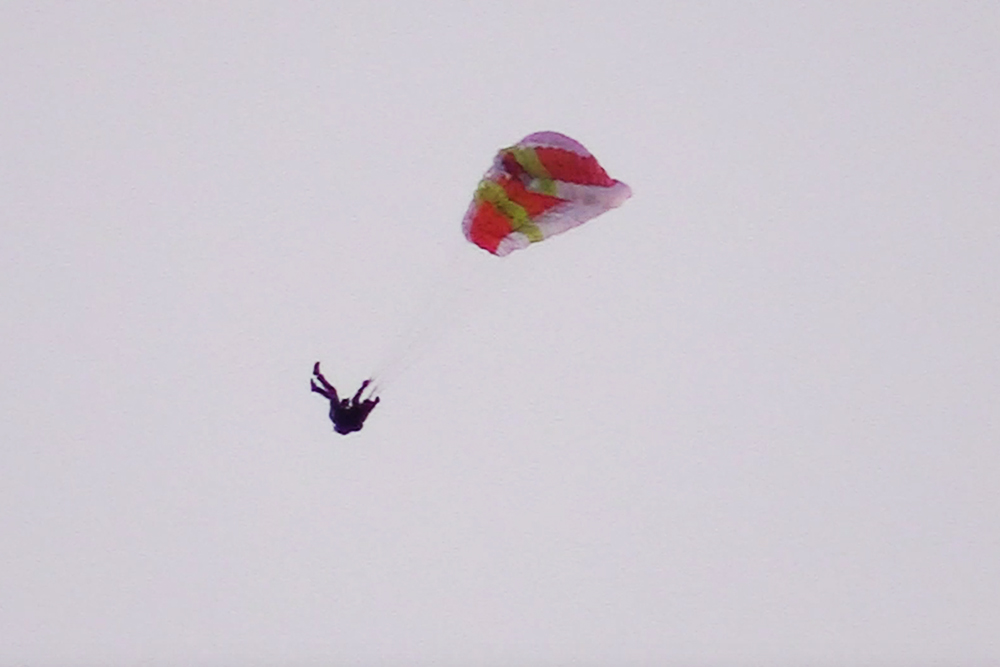 And to put that in context: I have completed several hundred flights, but most in calm conditions. Often before work I run up 1000 meters and launch at 6.30 am when the first rays of the sun appear. Every time it is a breathtaking experience, but of course it is very calm. And on the odd occasion I have flown in thermals, I sometimes get a bad feeling in the sense of ‘What if something extreme happened now?’. Hence the SIV course. So I spontaneously changed my mind when I was asked ‘What maneuvers do you want to fly tomorrow?’. The DOUBLESKIN had behaved very, very well so far. There were no unpleasant surprises and the collapses were not only moderate but even rather disappointing for me - I had expected more dynamics. I was so positively surprised by the behaviour of DOUBLESKIN (and with Niko I also felt in good hands), I wrote ‘full stall’ on the slip of paper - marked with a small question mark. 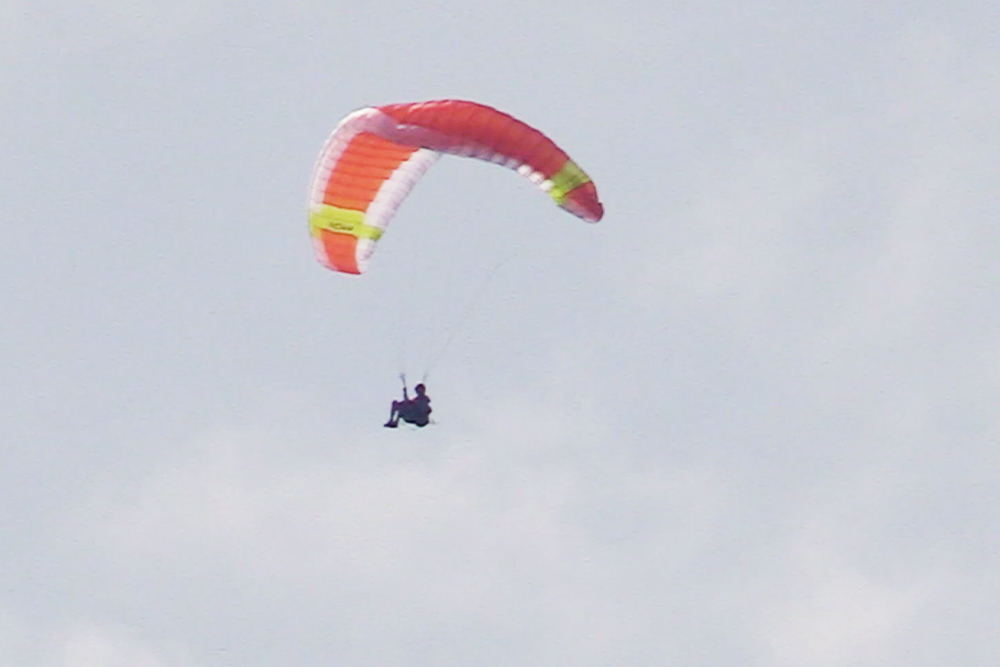 The next day, some familiar maneuvers were repeated, including spiral dive, wingover and asymmetric spiral. A spiral dive is not for me and never has been. The pressure on the head is just too much. The DOUBLESKIN winds in nicely, but as it gets down to business, the fun is over for me. The asymmetric spiral (where you collapse one side and then deliberately weight-shift into the collapsed side) went well in the beginning, but due to my not releasing it properly, it really did spiral. This was the first time during the SIV course that I felt I reached the limit. The reason - a very clear pilot error, that I will never repeat. A gondola ride later I had that queasy feeling again. Or put differently, I was scared. I was on launch and in a few minutes I was supposed to perform my first full stall. 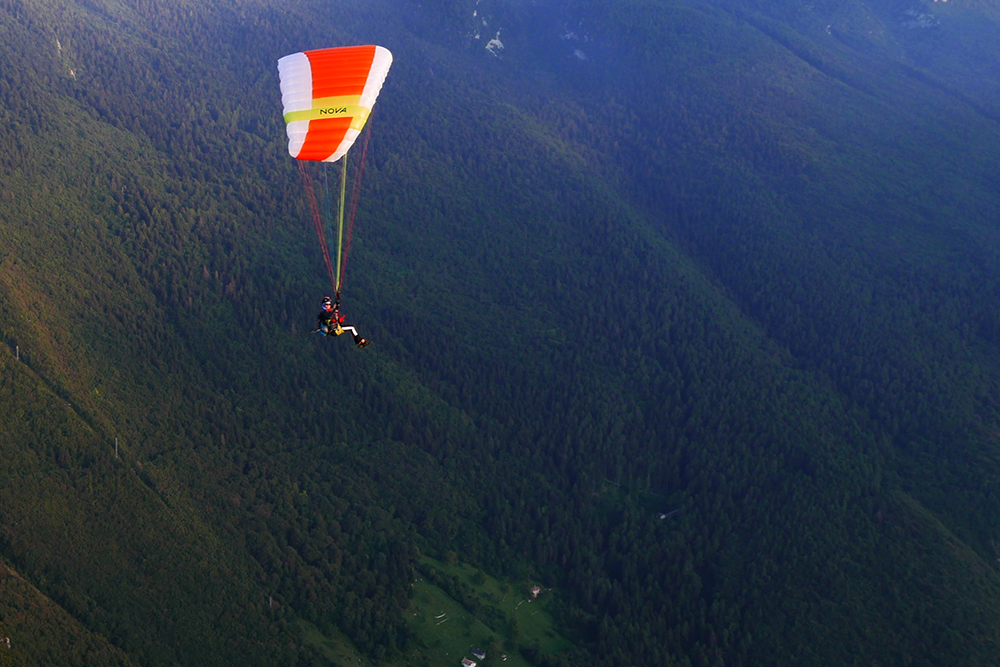 For me personally, the full stall is a maneuver that represents a clear step over a certain limit. Still, I flew the ten minutes needed to get over the lake. A crackling sound on the radio announced that ‘We will begin the full stall maneuver while we still have enough height.’ ‘Oh, great’ I thought. Niko explained the procedure once more. Progressively brake to the stall point, then pull the brakes down completely, stay in the stall and then find the correct brake position for the backfly. I braked, the wing stopped and with a jerk I pulled the brakes down fully. The wing fell behind me. I held the brakes. Above me everything was wonky, but I expected the sensation to be much worse. Then I released the brakes progressively and everything above me calmed down. I started to backfly. A crazy feeling. When I released the brakes I let them go a little too fast and the wing predictably shot forward a little. And then it was all over. I was quite surprised how smoothly it went. So I did it again straight away. The second full stall was also a lot less spectacular than I expected. I did a few more proper wingovers and collapses and was very, very satisfied with my day. And admittedly also a little proud of myself. 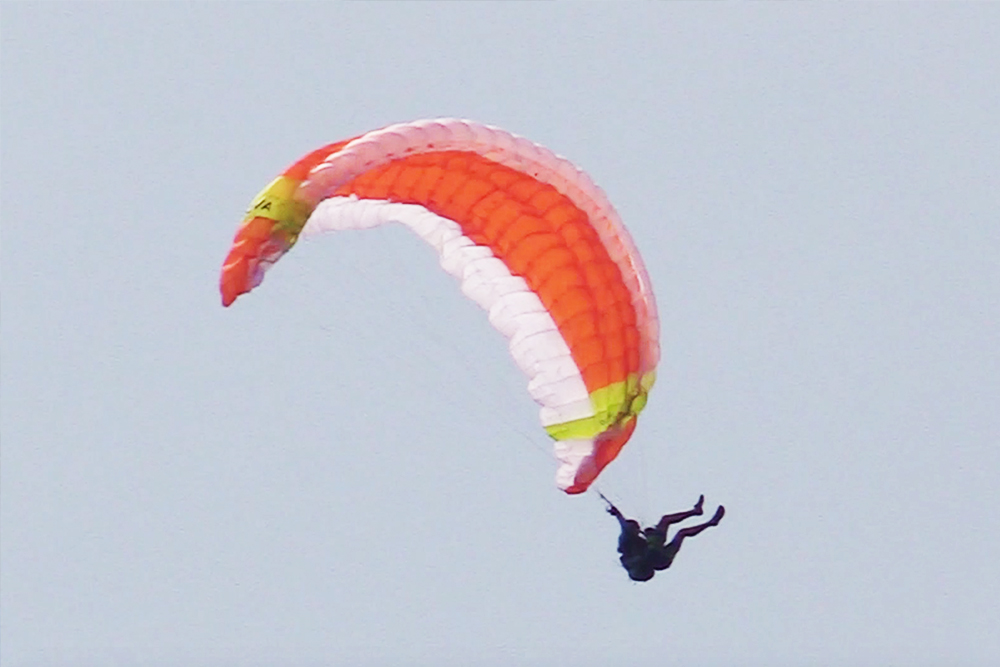 The next day we did a few maneuvers designed to consolidate what we had learned - and a (planned) parachute toss. It was a chance I wasn’t going to miss. To make a long story short… it all went well! I think every pilot should do an SIV course. Testing the limits under supervision is a great step forward in terms of safety. Even if you should always have a healthy respect for flying, I have lost the fear of bigger collapses. And the DOUBLESKIN? It behaved incredibly well in all maneuvers and is still in top form. It was already clear to me that the packing size, weight and performance of the glider are destined for hike & fly. Now I know from experience that it is not only light, but safe as well. For professionals, the BANTAM miniwing is probably the first choice - especially when it comes to high alpine terrain. But in terms of flying, an EN D is too demanding for me. But who knows, maybe it will be my next wing…”