“High five! It’s the weekend!”, writes Toni Edelmayr in an email in response to our question how his phenomenal 60 km flight in the Austrian Tennen Mountains came about. You can tell right away that he is someone who is enthusiastic about mountaineering and paragliding. In the subsequent conversation, this first impression is readily confirmed. 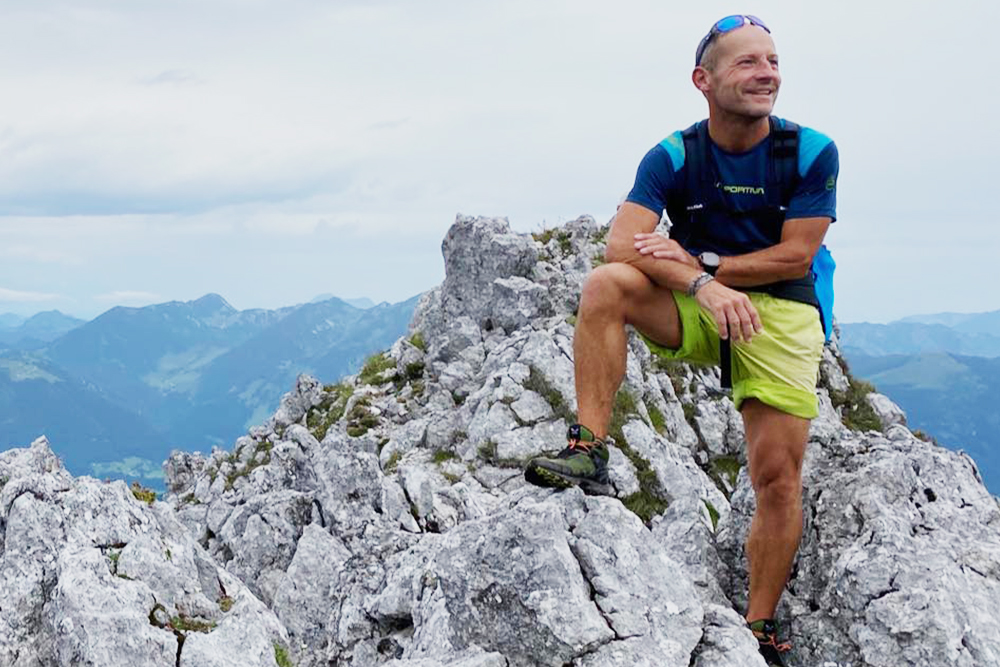 How did you start flying, Toni?

“As a mountaineer with 30 years experience, the combination of hike & fly has a magical draw for me. I did my first flights with a NOVA wing - the SUSI Q and IBEX were my introduction to para-alpinism. In 2019, I chose a DOUBLESKIN. I have never regretted that decision. On the contrary, the more I fly the wing, the more I like it. I have a size 17 and my take-off weight is 76 kg. It’s a real lightweight at only 2.1 kg and its packing volume is tiny. I can comfortably pack my wing, harness, parachute, helmet, drinks and a change of clothing in my 28 l rucksack.“ 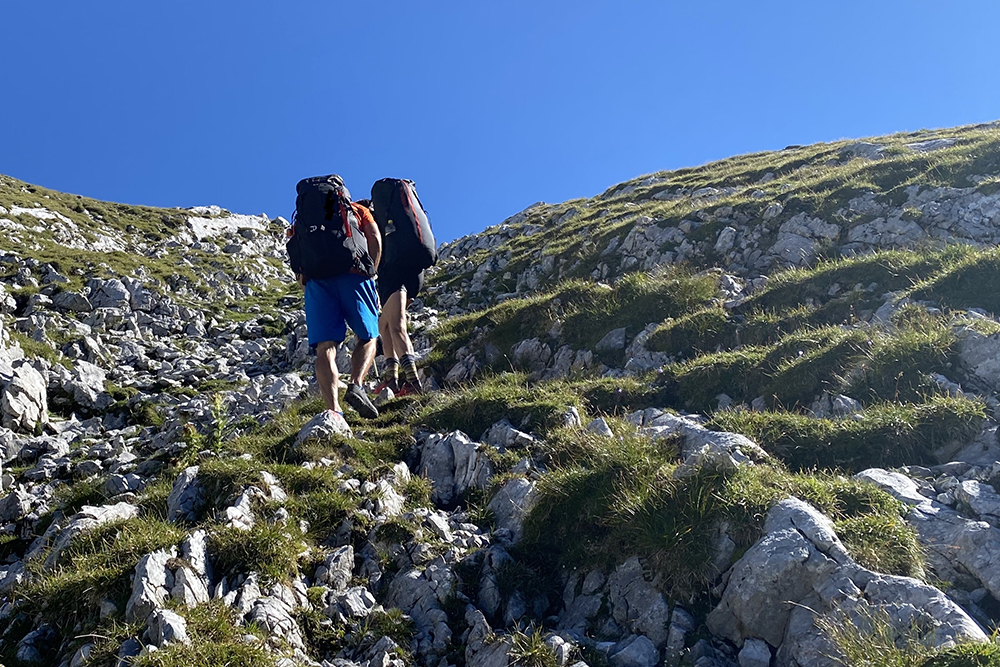 How did your 60 km flight come about?

“What can I tell you, it was one of the few hot days this year - like in a meteorology text book. I wanted a quick trip up the mountain before going swimming in the local lake. At the summit, with a view of the surrounding high mountains, the joy of anticipation begins. All around us was blue sky, the lush green of the valley below us, the glaciers opposite…I laid out my wing, winked at my partner and I was off! As soon as I launched the vario started peeping and I was climbing. Centering in the thermal was easy and you can really wind the DOUBLESKIN into the climb without any stress. Very quickly I was 300 m above the summit. Now the temperature started to be pleasant. The thought of cool water was still tempting, but with such good thermals the lake had to wait. We thought why go down and to the hustle and bustle of the lake when freedom is up here and the neighbouring peaks are so close?” 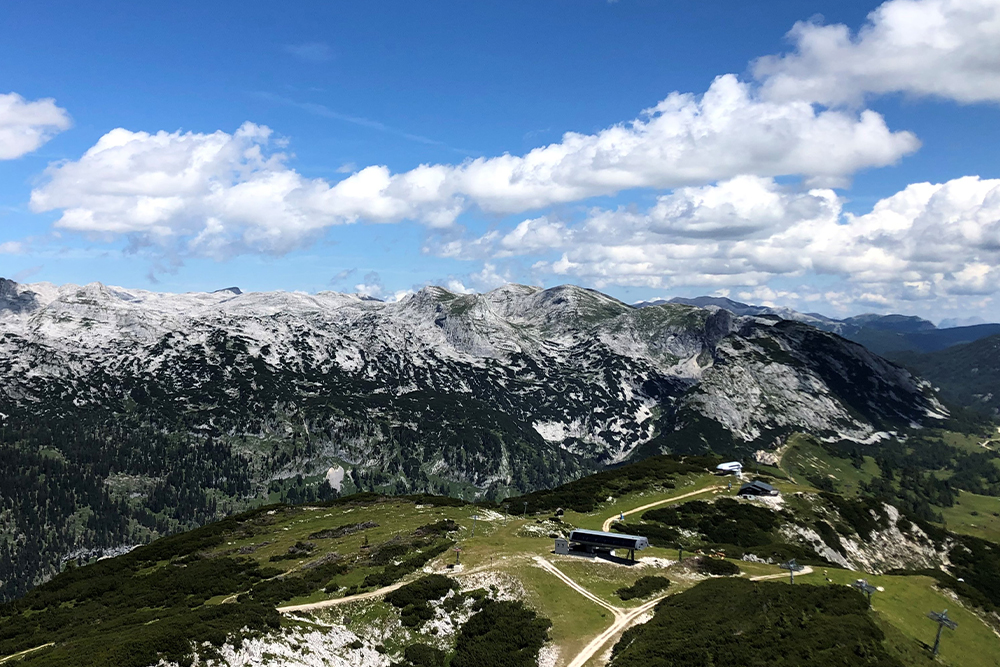 So you spontaneously went XC? What happened next?

“On Days Like This - I am just going to steal the title of the song to describe this magical day. I wasn’t the only one who felt like this. As we were flying I often looked across to my partner. Her body language was very clear… “let’s stay up here and let’s carry on flying”. In the end we were flying for two hours. And by the way, the flight was not limited by the wing, but because the trousers I was wearing were too thin. It got a little cold up there. Once on the ground, the vario showed a distance of 60.84 km and a total ascent of 2442 metres. This confirmed yet again that I made absolutely the right decision to buy the DOUBLESKIN.“ 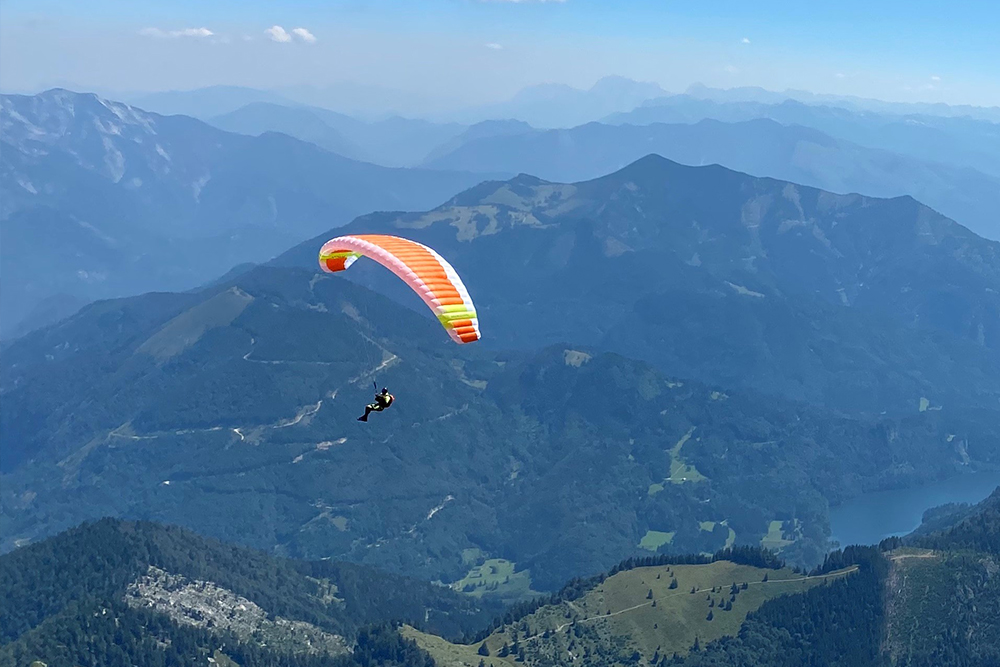 How would you describe the characteristics of the DOUBLESKIN?

“In short, a thoroughbred mountaineering glider. In suitable conditions and a not too passive flying style you can definitely gain altitude and distance. Due to the short lines, the handling is direct and agile, but without becoming boisterous. The very pleasant dampening gives you a sense of security. If it is a little restless at a take-off site in the mountains it is because of the super light cloth and it simply shows that it doesn't belong on the ground, but wants to go up in the air. Therefore I think its launch characteristics are super simple. The canopy inflates perfectly and can be controlled easily. The possibility of using the holding pins makes the launch on hard snow or on a glacier much easier. As soon as it is in the air the wing is taut and remains so. Whether it gets rough in the air, you fly into turbulent thermals or just glide in the late afternoon sun - the canopy stays solid and gives useful feedback. This reassures and also gives the recreational pilot correct and important feedback. It responds to both brake input and weight-shift directly and predictably. Only the limited speed sets the DOUBLESKIN its boundaries.” 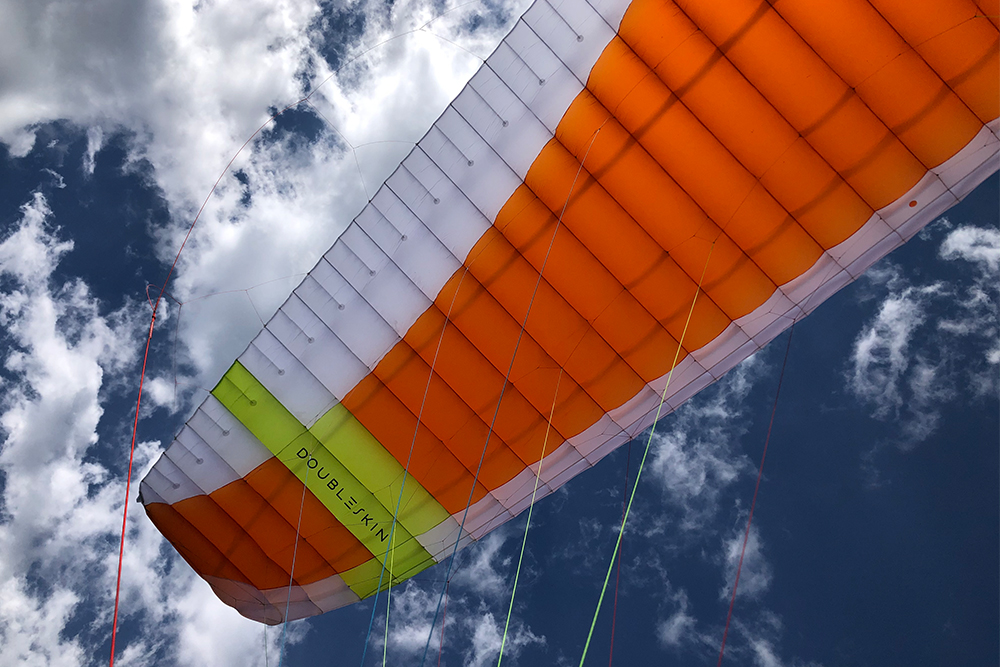 Would you recommend the DOUBLESKIN and if yes, to whom?

“Absolutely! For new pilots, mountaineers, recreational pilots. The wing is certified EN A, or EN B when flown in the extended weight range. Of course it requires an active flying style, but with a little flair for flying, as a pilot you can react in anticipation, given the feedback from the glider. Smaller collapses right themselves automatically and go almost unnoticed. And the fun factor when ground handling is great. But the light weight of the wing means some care is required. It wouldn't be good if it was slammed into the ground nose-first too often. I would say the great advantage of the DOUBLESKIN is that it is not just a trusty companion to save you many a descent - it also shows itself quite willing to munch a few miles. And how could you ask for more?”